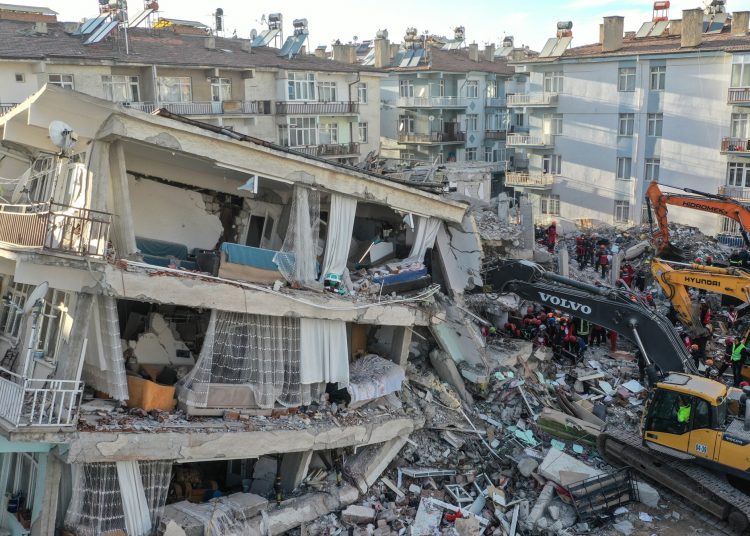 432
SHARES
8.6k
VIEWS
Share on FacebookShare on TwitterShare on WhatsApp

No fewer than four people have been killed and 120 injured in the  western Turkey after a powerful earthquake hit the Aegean Sea on Friday afternoon. CNN reports

The United States Geological Survey (USGS) measured the tremor’s magnitude at 7.0, while Turkish authorities said it was 6.6.

Turkish Health Minister Fahrettin Koca announced the death toll on Twitter, as people in and around the Turkish city of Izmir gathered in the streets after fleeing their buildings to seek safety.

TV footage showed water flooding through the streets in Izmir province as well as the Greek island of Samos, in what authorities called a “mini tsunami.” No tsunami warnings appeared to have been issued.

Zeki Soysal, a resident in Izmir province, told CNN Turk that he made it out of his office building just in time before it collapsed.

“There was an older woman in the building but we saved her, she got out. There is another building close to this building. They are continuing to try to get the people out,” he said.

Izmir Governor Yavuz Selim Köşger said search teams had rescued 70 injured people, and called for residents to stay off the roads so that ambulances and other emergency vehicles could reach affected areas.

“With all the means of our state, we stand by our citizens affected by the earthquake. We took action to start the necessary work in the region with all our relevant institutions and ministers,” Erdogan said

The Chief of Samos Hospital, Nikos Stefanis, said there had been only four minor injuries reported so far. There have been no reports of people trapped under rubble.

People have been told by Greek authorities to stay away from the shore and buildings, and to be on alert for high waves as aftershocks continue.