Former Speaker of the Ogun State House of Assembly, Rt. Hon. Tunji Egbetokun has said he and his family are under immense threat from perceived political opponents who are not comfortable with his political clout and principles.

The former Chieftain of Peoples Democratic Party, who served as Speaker during the administration of former Governor Gbenga Daniel, joined Action Congress of Nigeria (ACN) now APC just before the 2011 general elections.

Egbetokun led some lawmakers who were referred to as G-15 at the 6th Assembly in the state and their mission then was to intentionally stop what they termed as “unnecessary borrowing” on behalf of the state by Otunba Gbenga Daniel led administration.

According to him, the state’s internally generated revenue and allocations from the Federal Government then were enough for government to provide basic amenities and infrastructures without borrowing any money which may later become burden for generations to come.

Egbetokun while speaking with journalists recently confirmed the threat to his life and that of his family members by unknown people warning him to desist from supporting Senator Solomon Olamilekan Adeola popularly known as Yayi, a gubernatorial aspirant in the 2019 election. Egbetokun claimed that since he left government, he has been moving his family from one location to another within the country due to series of alleged threats from different quarters.

“ My wife has been receiving strange warning from unknown quarters to caution me to retrace my step or face whatever consequence that may come out of my political actions, regardless of me and my family’s whereabout within the country. “ “ I have also been receiving several threat from known and unknown people on phone and also notice some strange movement around my house recently.”

He maintained that , ”Now that the 2019 general election is fast approaching and the political stage is getting tougher, I know my political opponents are jittery because of my influence in the state and my support for a particular candidate, so I might need to relocate my family to a location outside the country for their safety and adequate protection, giving the prevailing circumstances I find myself.”

He expressed his mixed feelings over the persistent rate of security threats he and his family has been exposed to from perceived political opponents, which is due to his political principles that cannot be compromised for any reason that negates fairness, objectivity, sincerity of purpose, love for mankind and the endurance of a sane society where life will be more bearable and pleasant to everyone in Ogun State and beyond.

The situation in Nigerian politics is worrisome and issues like this are too common among political gladiators, all striving to outsmart each other. The level of political insecurity is quite alarming 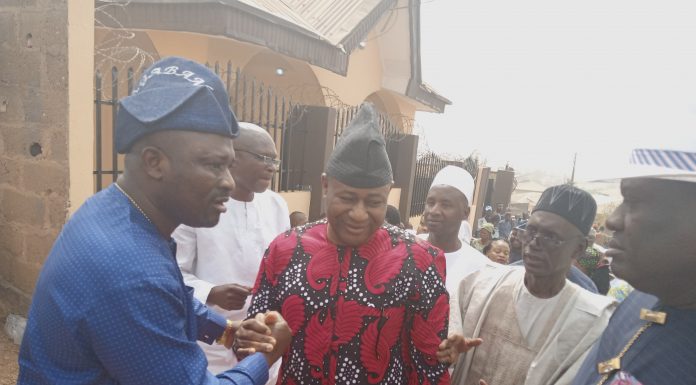 Olubadan Leads Ibadan Oba’s to Event Without Their Crowns

Ajimobi Approves Renaming of Roads After Lam-Adesina, Soun, Others

I Will Not Mortgage the Peoples’ Mandate – Atiku