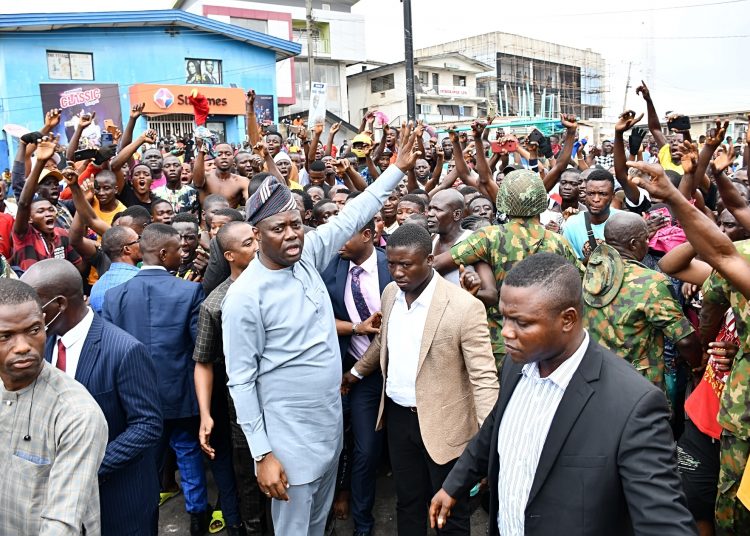 463
SHARES
6k
VIEWS
Share on FacebookShare on TwitterShare on WhatsApp

#ENDSARS protest on Thursday took another dimension in Ibadan as two police officers were burnt to ashes.

A motorcyclist was allegedly killed by the police at Abayomi area of Iwo Road, Ibadan, the state capital.

It was however gathered that police officers hit a motorcyclist who eventually died.

An eye witness said “The mob has killed two police officers today. In retaliation, the police killed one of them. It happened around Abayomi here”.

The arrival Governor Seyi Makinde calmed the frayed nerves as the youth were advancing to attack  the Testing Ground Police Barracks.

As around 1.40 p.m when Governor Seyi Makinde moved round the area, the two police officers were seen burnt on the road. Makinde pacified the surging crowd ,promising to take appropriate steps .

The youth  chorused that they did not want police to intervene in their peaceful protest.

Makinde who appealed to them not to destroy  anybody’s property, assured the protesters that before the day ended  he would work out how to secure the release of those locked up by the police. The governor promised to address issues raised by the protesters.

He also  assured them that he would meet with the state’s Commissioner of Police, Joe  Nwachukwu on the need to take the appropriate steps.

Makinde said: “The government which you brought into power would do the right thing for you. Oyo State Government will do the right and appropriate things for you. Yes, there is trust deficit, but I want you to trust me. Whatever happens to you, it happens to me. I beg you,I don’t want it to escalate beyond this.

“Those that were locked up, before the end of today, I will ensure they are brought out. Please”.

All efforts to get responses of the Oyo State Police Command proved abortive as the number of its Public Relations Officer ,Olugbenga Fadeyi was said to be busy for almost two hours.