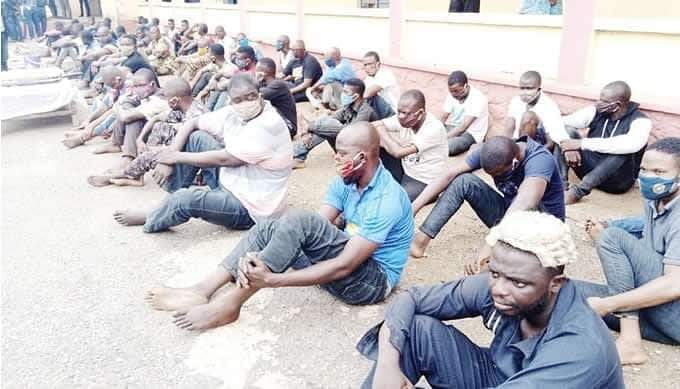 10
SHARES
2
VIEWS
Share on FacebookShare on TwitterShare on WhatsApp

The Ogun State Police Command, on Thursday, paraded 103 suspects for allegedly being involved in cultism, vandalism and armed robbery, among others.

Fifty of the suspects were said to be members of the Eiye and Aiye confraternities and were nabbed while planning to wreak havoc on the state.

The command had on Sunday raised the alarm that members of a notorious cult were planning to launch a state-wide campaign of terror and violence on the state.

Parading the suspects at the command headquarters, Eleweran, Abeokuta, the Commissioner of Police, Kenneth Ebrimson, said the suspects were arrested at different locations in the state.

Ebrimson explained that on Tuesday, July 7, 2020, at a hideout in the Ifo Local Government Area of the state, operatives from the Ifo Division arrested nine suspected cultists while planning their 7/7 day.

He stated that on July 6, 2020, three members of the group were arrested for planning to launch a bloody attack the following day on the Epe garage area of Ijebu-Ode.

Similarly, operatives of the Special Anti-Robbery Squad during a patrol in Abeokuta arrested nine members of the Aiye Confraternity in different parts of the state capital.

The CP explained that the Inspector-General of Police Squad, while working on an intelligence report, cordoned-off two hotels in Ijoko-Ota, where 27 members of the Eiye Confraternity were apprehended.

Ebrimson said, “Upon information received about the activities of the Aiye group to launch an attack on their yearly 7/7 day celebration, operatives from the Anti-Cultism Unit, led by DSP Muyiwa Adeosun, swung into action and went straight to an unnamed hotel in Ogijo, where some suspected cult members were holding their meeting.