So dry bones could still rise again? So corpses do walk? So “spot diagnosis” that can spot the dead from a far without medical prognosis could fail abysmally? So the one on life-support machine could still walk on his feet? All these questions ran through my mind on Saturday morning, the 19th of August, 2017 as I woke up to read Femi Adesina’s STATE HOUSE PRESS RELEASE notifying the Nigerian public of the President’s arrival the next Monday.

So with deep emotions, the President’s supporters trooped out to welcome him. I saw the unemployed, the poor, the less privileged, though whose hopes are damping since voting him two years ago, their faith remains resolute of the man seen as an epitome of integrity. Even though he has not made their lives better, strangely, their love for him remains unshaken. This I saw with my eyes on Saturday.

Why will anyone that calls himself or herself a human being with human blood wishes his fellow dead? I have watched the documentary of elephants who will starve themselves to death simply because a fellow elephant died. I have seen lions fought each other to death but the victorious one immediately remains sober for being responsible for the death of his fellow lion. If animals have the “animalism” in them, why can’t humans have “humanism” in them?To find an answer to this question, I have to reread Dr. Scott Peck’s best-selling book, People of the Lie.

In the book, the famous psychiatrist wrote about the tendency for people to do evil. He writes,

“In addition to the abrogation of responsibility that characterizes all personality disorder, this one would specifically be distinguished by: (a) consistent destructive, scapegoating behavior, which my often be quite subtle. (b) Excessive, albeit usually covert, intolerance to criticism and other forms of narcissistic injury. (c) Pronounced concern with a pubic image and self-image of respectability, contributing to a stability of life-style but also to pretentiousness and denial of hateful feelings or vengeful motives. (d) Intellectual deviousness, with an increased likelihood of a mild schizophrenic like disturbance of thinking at times of stress.”

I do not necessarily agree with Dr. Peck’s description of “evil” as the opposite of “good” as such. But, looking at his views about why people do evil or people become “people of the lie”, one will see the clear manifestations among those who pronounced him dead.

In July this year, a certain Femi Fani-Kayode, who is ordinarily supposed to be referred to as a statesman threw caution into the air by going out to “announce” the death of his imaginary president.

In analysing Fani-Kayode’s manifest “personality disorder” one is reminded of a chronic drug addict. Living on the “ghetto side” of Mushin, Lagos I have seen the negative effects of drugs manifest of abusers. I have seen them deny everything, including themselves. I have seen some of them deny the integrity of their mental faculties and processes. Some of them are on record to have denied their families even their own existence. They deny everything even when the evidence stares them in the face.

There was nothing anyone will tell Femi about Buhari apart from “he’s dead” that will make any sense to him. Not even the picture of the visit of the Archbishop of Canterbury to Buhari was enough. Buhari cannot recorgnise people; he cannot talk; he cannot think; he even immobile; he is mortally and clinically dead as far as he was concerned.

Even when people like Governors NyesomeWike and Ayo Fayose have since welcomed the President, our friend, whose last known job was a spokesman for a failed presidential campaign is yet to recover from the fact that the President is back to his seat to continue his duties. Every of his antic has failed abysmally since Nigerians will never become a People of the Lie!

OlalekanWaheed ADIGUN is a political analyst and independent political strategist for wide range of individuals, organisations and campaigns. He is based in Lagos, Nigeria. His write-ups can be viewed on his website http://olalekanadigun.com/ Tel: +2348136502040, +2347081901080
Email: olalekan@olalekanadigun.com, adgorwell@gmail.com
Follow me on Twitter @adgorwell. He is also the author of the book, Witnessing the Change. 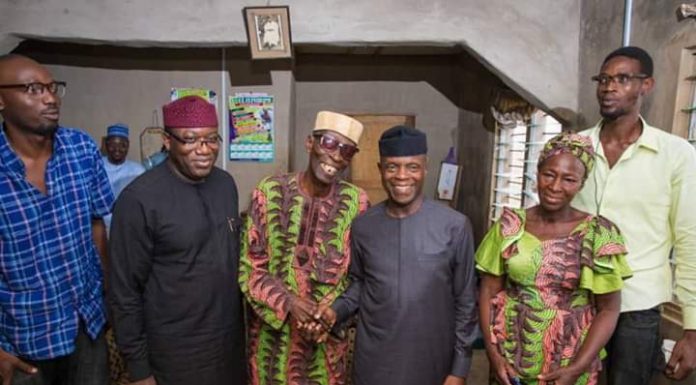 Those saying I’m sponsoring IPOB are under political bondage, I can’t be blackmailed –...

LAUTECH,The Misconception About ASUU Meeting and The Drama of Absurdity by...