In a matter of months the good people of Ekiti will have another golden opportunity(an opportunity that only presents itself after every four years in our clime) to choose between consolidation of executive rascality through crony and discontinuation of an appetitive style of governance, a form of political economy style propagated and popularized by the current governor of Ekiti State, Mr. Ayodele Fayose and his political associates since the beginning of his second term in 2014. The matter that is therefore before thepeople of Ekiti home and abroad is clearly either to consolidate or end Fayose’s brigandage politics through his new crony. Simply put, Ekiti people in July 2018 will be confronted with polimetrix probability whose political outcomes will be one over two….Ekiti will eitherconsolidate Fayose’s despair politics or terminate Fayose’s bleakness in the coming gubernatorial elections. That is exactly what the political outcomes in Ekiti is going to look like sooner or later!

The matter before the Ekiti people as the Yorubas’ would say ‘o gbero” meaning its worth pondering on. How will one not worry about everyday display of ignorance and blasé behavior from a man who currently governs Ekiti, the state that is Nigeria’s intellectual capital? Just tell me, how will some of us; who are in one way or the other are affected by the needless display of gangerism, thugery and lack of decorum from the proximate political actor in Ekiti just keep quiet and  continue to watch the daily political idiocy in the state?  Sometimes, I just ask my friends from Ekiti, how did they get to this awful situation?  Ekiti is one of the states in the south western Nigeria in particular and Nigeria that holds so much promise and potentials and a state that every omoluabi in the south western Nigeria was once proud ofbut sadly, the state is currently governed by vulture, oaf governor and a tortuous political class.  I ask again, how did Ekiti get here?

To be frank, Ekiti deserves better than what the statedesolately faces at the moment. It is no doubt that fountain of knowledge state is in a political mess and there is an urgent need for collective rescue of her soul from the current perverts in power.

Thankfully, Ekiti can still have back its lost opulence if there could be a collective efforts geared towards this.  Meaning the rescue of the state is not as difficult as rocket science but only requires the collective will of all the sons, daughters and friends of the state both home and in diaspora to urgently rise up and clinch and guide jealously the control of the state from  the hands of Fayose and his duplicitous characters. The rescue of the state as stated above, is not a forlorn task, in fact, it is a collective duty of not only the Ekiti people but of all meaning Yorubas and their friends in Nigeria and beyond which must be piloted not by Fayose and his cohort or his replica whom he is currently grooming to continue the further smashup of the state.

No, not Professor Eleka! Prof, I can see, is yet to fathom the intellectual deficiency in concurring to Fayose’s.  If Eleka truly professes intellectually as his scholarly title suggests, he must have read in between the lines and do the honourable, just return to the classroom like Prof. Jega and consolidate his scholarship not politics of stomach infrastructure. Indeed, the year 2018 is a year for Ekiti, and so strategic is the year that Fayose will have to measure his political worth again just before his final exit from Oke Ayoba after another four years of his misrule.

As much as this year is strategic to all the true sons, daughters and friends of Ekiti to nobly terminate  Fayose’ appetitive governance  and his men, the opposition party in the state, All Peoples Congress (APC) equally has a golden opportunity to be the vanguard for this liberation but  with a caveat! Looking at the plethora of oppositional politicians; who have expressed their interests to fly the flag of APC at the July governorship election in Ekiti, one will not but appeal to APC as the only viable hope to seize the moment carefully and get its  act right by presenting, a heroic figure as its governorship candidate in the coming election.

Frankly, if APC vetted strategically the four major governorship wannabes in its fold, starting from the two  former governors of the state, Olukayode Fayemi, Olusegun Oni  and down to Hon. Bimbo Daramola, a former House of Representative member and compare their political value, integrity, audacity, demeanor, popularity and general acceptance both in Ekiti State, abroad, among the poor masses of Ekiti voters, young, old, women, men, professionals, peasants and artisans with Senator Babafemi Ojudu, a former senator, current political adviser to the President on political matters, an astute journalist, humanist, activist, politician, intellectual, strategist etc. one will not but appeal to APC to support Babafemi Ojudu in this quest to rescue Ekiti. This is because only Ojudu stands a better chance and seems more popular with the current yearnings of Ekiti people as the next governor.

Senator Babafemi Ojudu’s political credentials and political nexus in Ekiti, Nigeria and abroad cannot in anyway be underestimated. He is a man who is seen as a true bridge between the poor and the rich. He is a poster boy of hope and a man who connects well with all social classes.

His foray into politics has a long memory starting from his activism in his University years, to his memorable years of active journalism especially on  how along with few others, used his pen to fight the years of military tyranny in Nigeria, a cause that endangered his life and family members. He was among the few pro-democracy activists who wereunfairly incarcerated for fighting for entrenchment of democratic rule in Nigeria. And it was on record that as a parliamentarian in the 7th National Assembly, he served his people satisfyingly.

ALSO READ  FG replies Obasanjo, says Former president is living in the past

Therefore, based on this account and many more, it is pertinent to appeal to APC, party delegates and power brokers not only remember the strategic roles and contributions Senator Babafemi Ojudu made to the emergency of the former Governor Kayode Fayemi and his strategic inputs to put the party back on the path of recovery of her glory in Ekiti after the latter’s contemptible performance at the last polls and support Ojudu’s candidacy.

Finally, as APC prepares to conduct its primary; in about some weeks to come, the  party should canvass and support  Senator Babafemi Ojudu, a man who has remained faithful, loyal, supportive, abiding and resolute to APC and good governance not only in Ekiti state but Nigeria as a whole. APC should ponder deeply and support Senator Babafemi Ojudu, who have unlike others, taken his political gospel across the nooks and crannies of the state, including a recent trip to honour the invitation of Ekiti sons and daughters abroad, specifically the United States of America. Senator Babafemi Ojudu has consistently shown that he is prepared for the task ahead.

In addition,Ojudu hasdelightfully demonstrated that he is a proactive politician who understands what the people of Ekiti need by taking a step further than his other contestants through his well-articulated manifestoes of rescue tagged the “FINE AGENDA”.

As APC  gets set  for its primary with all the twists, dramas, and events that will begin to unfold in the weeks to come, one prays that APC and its delegates wholly support Senator Babafemi Ojudu on this mission to rescue the soul of Ekiti State. One will also hope that the party truly understands the public discontentment with Fayose government, his marginal deputy, the disparage tune in PDP and the optimistic for rescuing the millions of Ekiti people lies in Senator Babafemi Ojudu. 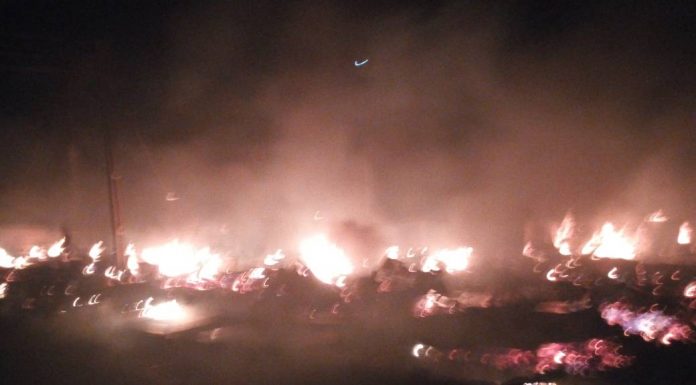 Akeredolu Reacts To Supreme Court Judgement , Says There Is No Cause For Alarm