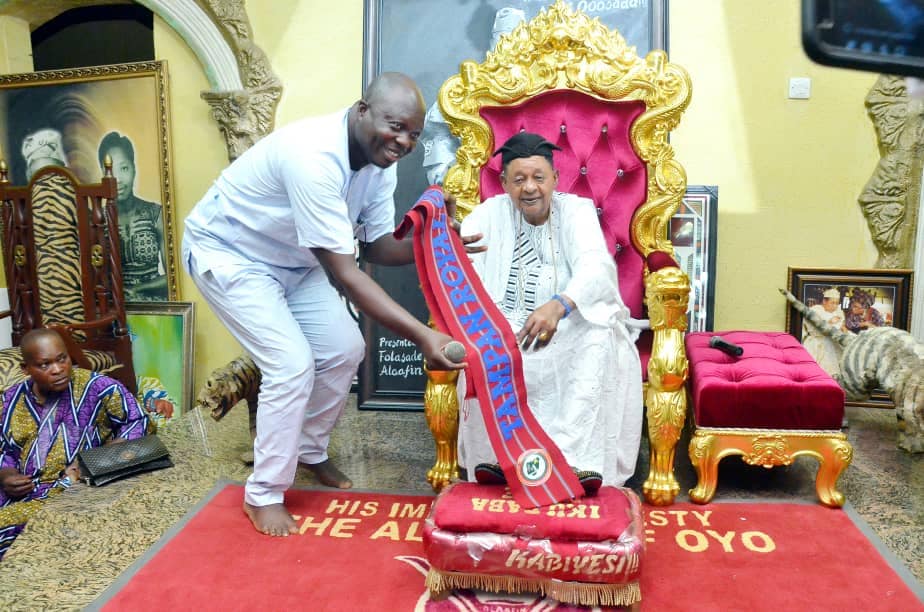 TAMPAN national president, Mr. Bolaji Amusan, left, presents the Alaafin of Oyo His Imperial Majesty Oba Lamidi Adeyemi 111 with the insignia of the honourary title of ‘Life Royal Grand Patron of TAMPAN Worldwide’, in his palace in Oyo town.

164
SHARES
0
VIEWS
Share on FacebookShare on TwitterShare on WhatsApp

The Central Working Committee members ably led by seasoned actor, Bolaji Amusan .a.k.a. Mr. Latin, and some  notable elders  including Otunba Adebayo Salami, Chairman of the Board of Trustees, and other notables in the association, to pay homage to the highly revered monarch in Oyo

Speaking on the team’s visit, Mr.Latin,  acknowledge the constant support of the monarch for the association, seized the opportunity to reel out some of TAMPAN’s achievements under his leadership.

According to the star actor, the association under him was introducing a health management scheme for members, for which over 2000 members were already registered. This move, he noted, would encourage personalities with proven integrity to identify with the association and all its programmes.

Latin admitted that though the present executive came on board on 14th December, 2018 with a lot of unresolved issues, which include inadequate health care for its members, he was determine to do his best with the support of his esteemed exco to take TAMPAN to an enviable height.

The presentation and decorations of His Imperial Majesty were done by Mr. Latin assisted by Chief (Mrs.) Folake Aremu a.k.a. Orisabunmi. The official decoration of the monarch, according to the TAMPAN deputy president, Alhaji  Abiodun Olanrewaju, shall be done during TAMPAN National Conference coming up on 11th December, 2019.

In his response, Oba Adeyemi, who spoke though the Same of Oyo Kingdom, High Chief Lamidi Oyewole, thanked the association on behalf of the monarch, the wives, Oyomesis and the entire Oyo people for the honour.

Oba Adeyemi recalled the history of Yoruba on genetic inheritance through which he noted he was considered for the honour, while he enjoined the team to make the uniqueness of Yoruba culture in terms of contents, science of origin and the acceptability of its diversification of languages, dress, food and religion and the preservation and sustainability of its language, the association’s watchword.