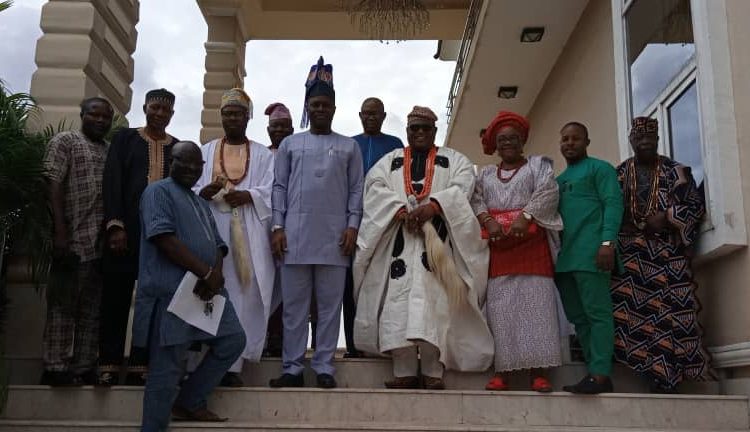 384
SHARES
6.2k
VIEWS
Share on FacebookShare on TwitterShare on WhatsApp

The Governor of Oyo  State, Engineer Seyi Makinde, has described Akure people as one of the most upright, bold  and honest  people in Yoruba land and the nation at large.

The governor stated this while playing host to a delegation from the Deji of Akure, Oba Aladetoyinbo Aladelusi Ogunlade Odundun II, which was in Ibadan to commiserate with him on the death of his mother, Madam Abigail Makinde.

The governor described his mother as a role model whose dedication to work, uprightness, boldness and honesty were the traits of Akure people.

A statement by Mr. Taiwo Adisa, the Chief Press Secretary to Governor Makinde,  quoted the governor as saying “when you see an average Akure man or woman, you see courage and see people who are true to their words.”

The governor said he was very delighted with the visit and urged Akure people, the kingdom where his mother was born, to actively participate in her funeral, which he said will hold in the first week of December.

Governor Makinde used the occasion to appreciate the  people of Akure for standing firm during the October 10 governorship election in Ondo State, adding  that they had shown their readiness to   produce the governor of the state.

“However, we will continue to appeal to other divisions and senatorial districts to be on the same page with Akure,” the governor said.

While delivering the condolence message from the Deji of Akure, the leader of the delegation, who is the Asae of Akure Kingdom, Senior High Chief Sola Adegbonmire, described the governor’s mother as a worthy daughter of Akure Kingdom.

He added that the Omoregie family, where Madam Abigail Omojolagbe Makinde hailed from, is a family of exceptional and wonderful people in Akureland.

Oba Aladetoyinbo described the death of Madam Makinde as a painful loss not only to the Makinde family but also to the entire Akure Kingdom.

He then prayed that God would grant the family the fortitude to bear the irreparable loss.