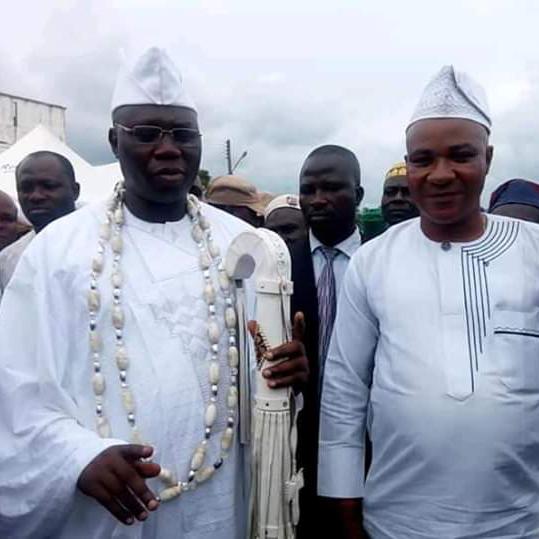 The Oyo state chapter of Oodua people’s Congress (OPC )under the leadership of Comrade Rotimi Olumo has maintained their support for the Are of Ona kakanfo of Yoruba land Otunba Gani Adams towards his development for Yoruba race.

Speaking with newsmen in ibadan Oyo State capital yesterday, comrade Rotimi Olumo wondered why some people who are out on mischievous ambition want to use the name of Are Ona Kakanfo to score political point. “This mischievous people want to reap where they didn’t sow and that is the reason why they want the favour of senator Bola Tinubu at all cost.
Olumo maintained that the interest of Yoruba land has always been of Paramount interest to the Are Ona Kakanfo of Yoruba land.

It’s a surprise that the likes of Razak Arogundade can come out to castigate the lover of Yoruba race . Let me tell you that Razak Arogundade is a politician that want political relevance by all means. His pedigree and antecedents shows that he needs the favour of senator Bola Tinubu.

Oyo Opc knows that Otunba Gani Adams is a blessing to Yoruba race and that is why we are giving him our full support. It saddens one’s heart that Arogundade said that Are Ona Kakanfo needs to undergo training and cancelling on how a true Omoluabi should comport himself. I want to tell you that Otunba Gani Adams is someone that has respect for elders and that is the reason why he was made the 15th Are Ona Kakanfo.

Comrade Rotimi Olumo said that Arogundade of the new Era OPC needs financial assistance from Tinubu. We OPC Gani Adams in Oyo state will not fold our arms and allow the likes of Arogundade to rubbish the image and personality of Are Ona Kakanfo.

“I can tell you that all what Are Ona Kakanfo is after is the growth and development of yoruba land. Oyo Opc strongly believes in his ideology.
Comrade Rotimi Olumo said that OPC is one and there is nothing called OPC NEW ERA. He therefore urge members of the public to disregard Arogundade because is an APC chieftain.

“Comrade Rotimi Olumo also said that OPC Oyo State are solidly behind Otunba Gani Adams because is there any father of all
Are onakankanfo is our leader and he deserves respect. We are not politicians. I want to encourage our leader not to allow the likes of Razak Arogundade to discourage him because they are after money.