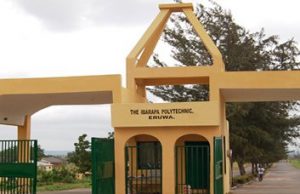 2
SHARES
4
VIEWS
Share on FacebookShare on TwitterShare on WhatsApp

The newly appointed Governing Council chairman of The Ibarapa Polytechnic, Eruwa, now Adeseun Ogundoyin Polytechnic, Dr. Ogundiran Samuel has disclosed that he has never for once arrested by the operatives of the Economic and Financial Crimes Commission (EFCC), contrary to a media report of his alleged arrest by the anti-graft angency for financial misappropriation, describing the news as false.

Ogundiran said this while reacting to a media report of his alledge involvement in financial misappropriation noted that the present administration in Oyo State has set up visitation panel to look into the allegation of misapproriton of funds and other issues that cause crises in the school, adding that the panel report was submitted to the government and the white paper of that report has been released, where non of the Council members including the himself was indicted in the white paper.

The Governing Council chairman, who is an Associate Professor of Educational Administration & Planning pointed accusing finger to the suspended management of the institution led by the former rector, Rasheed Eyitayo as behind the fake news, saying that all what the suspended management are trying to do was just a mere blackmail and propaganda to tarnished his image.

“As a result of the misappropriation of the suspended management, they wanted to use EFCC to stoped a meeting that was held on 28th of May, 2019 so that the meeting would not hold because they know that if the meeting was held, the decision of the council might affected them.

“We got to EFCC office in Ibadan, late on that day and we were later released on personal recognition, so would I be release on personal recognition if there is indeed a case of misappropriation? And since then, this case has never come up, the Police Area Command in Eruwa was even aware of the whole senario.

The submission of the Governing Council’s chairman tally with sources from the institution union executives together with the elders of the host community of the institutions.

The secretary, Joint Action Committee (JAC) of the six state owned tertiary institutions, Mr Akin Adekanbi noted that the date on the fake story was the last date of the last management which has been suspended, saying that the writer of the fake report should have done their investigation very well before embarking on it, adding that the writer should have confirmed from the EFCC Ibadan, the Police Area Command in Eruwa and IBR, 92.5fm, Ibadan.

There was a lot of crisis in the institution during the tenure of Eyitayo led administration, and it got to a stage the the Governing Council set up a committee to investigate the cases and the last day desicion was about to make on the committee report that the EFCC visited the campus, the union in the campus insisted that the meeting must hold, and after the meeting, the Governig Council chairman and its members, the management and all the three union in the school went to EFCC office

“We got to EFCC office at Iyaganku late, and their boss was not around and they were later released on personal recognition because evidence worked against the suspended management, there are management outside which the government has suspended and their names has been removed from the payrole of the institution, so in one way or the other, they will be aggrieved.

“Alot of investigation and search has been done on the appointee before government eventually appointed them, so if anybody at this time is trying to blackmail or to go against the desicion of the government, posterity will judge such person, we held a JAC meeting today and nobody resisted what the government has done.

“The government has really done well, Makinde is a peace loving governor, he want peace across the state, the education sector is one of the sensitive areas because once there is a good council, there will also be a good management

The chairman, Senior Staff Association of Nigerian Polytechnic, Ibarapa Polytechnic branch, Mr Titiloye Joseph described the fake news that is currently trending against the governing council chairman as the work of blackmailer who wanted to tarnished the image of the chairman because of his re-emergence as the governing council chairmanof the institution

“The suspended management used EFCC to stopped a meeting held by the governing council which might affect them, the Police Area Commander in Eruwa told the EFCC operatives that the council should be allowed to hold the meeting and the council will followed the anti-graft after the meeting which they were later released thereafter.

When contacted on phone, a source within EFCC Ibadan office who pleaded anonimity because he was not authorized to speak with the press said that the antigraft agency only invited, not arrested the Governing Council chairman, adding that the case was not a serious issue because the EFCC would have take it up by then if it was a serious issue.

Recalled that Governor Makinde constituted the Chairmen and Board members for the six state-owned tertiary institutions which includes The Polytechnic Ibadan, Oke Ogun Polytechnic, Adeseun Ogundoyin Polytechnic, Eruwa, Emmanuel Alayande College of Education, Oyo among others.