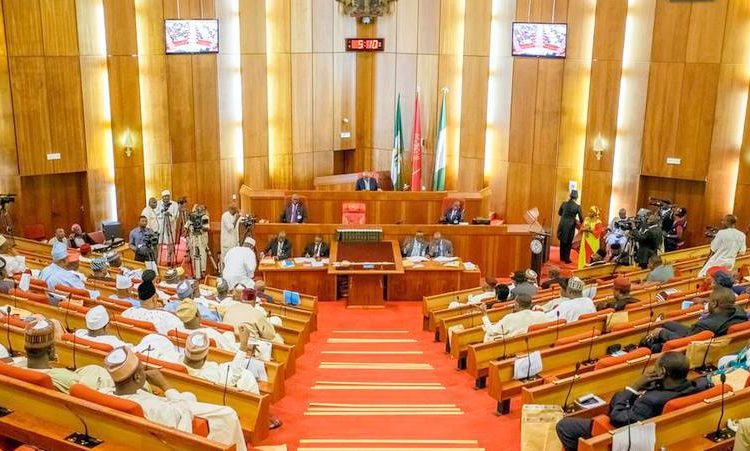 361
SHARES
4.7k
VIEWS
Share on FacebookShare on TwitterShare on WhatsApp

The Southern Youth Forum (SYF), the umbrella body of youth group from the 17 southern states of the federation, has described Tuesday’s call by the Senate for the resignation of the nation’s Service Chiefs as a diversionary and hasty tactic aimed at treating the symptom instead of finding the real solution to insecurity challenges.

In a statement issued by the leadership of the forum and signed by Barrister John Atani (south-south); Engr Fidelis Nze (south-east) and Comrade Oladimeji Odeyemi (south-west), the youth said its unconstitutional and self-serving for the lawmakers to call for the resignation and sack of the service chiefs whose briefs start and stop at the table of the President and Commander-in-Chief.

The upper legislative chamber made a resolution that the service chiefs should step aside after the reaction that trailed the killing of at least 43 rice farmers at Zabarmari in the Jere Local Government Area of Borno State last Saturday.

The youth leaders said the senate should rather be proactive by generating feasible solutions birthed through legislative instrument to face the challenge of insecurity, banditry and insurgency in the country.

The statement read: “Again, the senate has acted outside the purview of its constitutional rights. The call is not only hasty and unnecessary, but it is a crude means to stampede the service chiefs out of office and throw the gains of five years or thereabout out of the windows.

“It is imperative for all Nigerians to know that the solution to our security challenges does not lie in changing a set of service chiefs for another. No! Clearly, many factors adduce for success but in this case, consistency and experience, are the standouts needed to get a clear headed victory especially in the fight against insurgency. Interestingly, the current leadership of the Nigerian Army and other sister agencies possess this in abundance.

“Our profound advice to the lawmakers is that issues of security are quite sensitive and in dealing with it, we should be circumspect so as not to jeopardize the success we have achieved bearing in mind that fighting insurgents is not conventional warfare and our common enemies are lurking around to take advantage.”

The coalition noted further that. “President Muhammadu Buhari is the right arbiter, and he knows where it pinches. He knows where the problems are. He should not be pushed, coarse or prompted in this regard. As a retired General, he understands what security formation and architecture is all about. That needed synergy within the intelligence community and military formations can’t be bought in the open market.

“No doubt, the military, especially the Nigerian Army in the last five years, have conducted and subjected itself to the best practice standards, utmost professionalism and dedication to the protection of the sovereignty of our great nation from all forms of aggression, domestic or foreign.

We can’t afford to thrash those gains on the altar of politics.

“We think they should rather inquire from the President what triggered this recent killing. Supposing the president sacks the service chiefs and the insecurity continues? For the Senate to now feel sacking of service chiefs is the solution appears strait-jacketed.”