Why i want to be President- Dankwambo 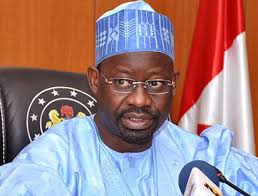 Gombe State governor, Dr Ibrahim Dankwambo, on Saturday  declared his intention to run for president in the 2019 general election on the platform of the Peoples Democratic Party.

Dankwambo, who made his intention known yesterday during a meeting with the delegates of the party from the North East geopolitical zone, called for their support ahead of the party’s presidential primary election.

At the meeting held at the new Banquet Hall of the Government House in Gombe State yesterday, the governor said consultations were ongoing on the need for the party to pick its candidate from the zone. He said: “We have been making consultations and those consultations are ongoing.

We felt, this time around, our zone should be given opportunity to conduct and preside over the affairs of the country.” “We have sent delegations to various zones so that they can have the taste of the North East this time. On that note, I think all of us in this room are on the same page. Since all of us are from the same zone, whoever is qualified to contest that position should be encouraged to contest.”

He noted that power comes from God and when he has ordained a position of leadership for anyone, there is nothing anybody can do to alter it. Dankwambo, who is in his second and final term as governor, said whoever is seeking the position of president must show he has the capacity  to the job. “For us to do it, we must be able to showcase somebody that has done it before .

Whoever is given the opportunity to contest for the position should be encouraged. “If the problem is security, you cannot say you will finish Boko Haram in three months when you have not done it before . If the problem is our economy , we have to be able to present a candidate that has worked on the economy . You cannot just sit down and say ‘I will resolve the problem of the economy now. “We need to present a candidate that has a template on what he has done on economy before .

To resolve the problem of hunger in Nigeria is not (by just making) a statement.” He said he had come to consult with members of his party  in his zone about his aspiration and to seek their support going forward. “After a lot of consultation, my people felt we should consult with you , so that apart from other candidates from the zone that have indicated interest , I should also show interest, consult you and go round to seek support of other members of our great party,” he said.

Speaking on the state of the party, Dankwambo said, “Our great party ,PDP, is undergoing a lot of reform. We are making the party more attractive. We are seeing people coming back to the party . For the people that are coming back , I want appeal to all of us, ‘Don’t close doors; let those who want to come be welcomed . Accept returnees with open hand and heart. Let us continue to support the National Working Committee of our great party in their reforms so that, one day, we will be where we were from 1999 to 2015.”

in his speech, the director-general, Dankwambo Campaign Organisation, Prof Terhemba Shija, urged the zone to speak with one voice during the forthcoming primary election of the party. He noted that even though the zone had always been significant to the history of the country, it had not been able to produce the president of the country.

“If we want to change the state of our economy and improve security in the country, we have Dankwambo, somebody who is committed, whose life is synonymous with the country. He is young, dynamic and available to rebuild the country. There is something special in Dankwambo.” he added.