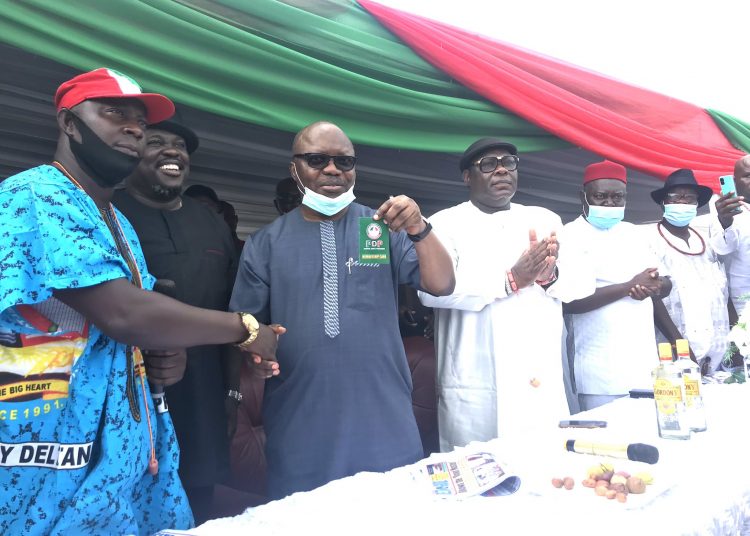 22
SHARES
3.2k
VIEWS
Share on FacebookShare on TwitterShare on WhatsApp

Former Delta state Governor ,Dr Uduaghan  on Monday  returned to the Peoples Democratic Party PDP to years after dumping the party for the All Progressives Congress APC

As a member of the PDP he served as secretary to the government for four years  and governor for eight years.

The former governor was received back into the part  at his ward, Aigborodo Ward 6, in Warri North Local Government Council of Delta State.

“I am back to join forces with other party greats to strengthen our party, the largest party in Africa -PDP!,” the ex-governor had  stated on his Twitter handle.”

The former governor of Delta State defected from the Peoples Democratic Party (PDP) to the All Progressives Congress (APC) in August of 2018 when he said ”I am going into APC as “John the Baptist” to the numerous Deltans that are coming in, soon – very soon.”

At the time, he said in a statement titled ‘Moving On To The Bigger Playing Field’, that he decided to join the ruling party because of the Muhammadu Buhari administration’s effort in tackling the crisis in the south-south region.

In 2019, Uduaghan went on to contest for the Delta South senatorial district under the platform of the All Progressives Congress APC but lost to James Manager.

The former governor who met with Governor Ifeanyi Okoya two weeks ago to fine-tune plans to return to PDP said the decision was also buoyed by persuasion from party leaders, supporters  and stakeholders