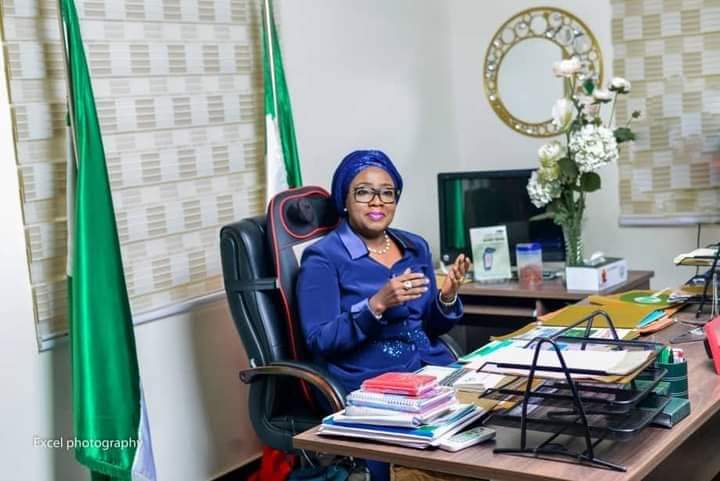 362
SHARES
4.7k
VIEWS
Share on FacebookShare on TwitterShare on WhatsApp

On a day like this, the atmospheric condition would display the unusual and common colours just because it is coincides with the birth of a great queen, heroine and leader par excellence. Perhaps, our society would have significantly improved beyond this level of we have the likes of today’s birthday celebrant whose anniversary of her journey to this world has gained popularity to peak, to say the least. No wonder, her name has left so many indelible marks in governance and law making, in particular.

Born 42 days after Nigeria gained her independence in1960, precisely November 11 in Kaduna to Alhaji and Alhaja Akande who were a part of the Jokodolu family, she attended St. Annes’ Primary School and the Queen Amina College in Kaduna.

After her secondary education, she proceeded to College of Arts and Science in Zaria for her A levels and thereafter went to Ahmadu Bello University, (ABU) in 1979, where she read Law and obtained her LLB in 1982 with second class upper division. She went to the Nigeria Law School and was called to bar in 1983. She later went to the University of Lagos for her second degree in Law (Masters of Law) in 1985.

Rt. Honourable Akande-Adeola, a legal icon, started a career before she eventually ventured into politics to help the poor, lowly, vulnerable, downtrodden, aged, widows, widowers, youths, children, students, and the rich alike. Successfully, this distinguished daughter of Ogbomoso and mother of so many youths has contributed, in no small measures, to her immediate environment, grassroots, state and the nation as a whole. It is not unlikely that she takes after her father the virtues of ‘omoluabi’, cheerful giving and unquantifiable philanthropy.

Though she joined the Peoples Democratic Party (PDP) in 1999, she was first eventually elected to represent the Ogbomoso North, South and Oriire Federal Constituency at the lower chamber of the National Assembly in 2007. Owing to her brilliant performance, dedication and perhaps loyalty, she was reelected and subsequently became the majority leader of the House in 2011. She had made a lot of move and struggle to become the House’s Speaker which some powers that be truncated. Up till now, she has given on her intention to represent Oyo North Senatorial District in the Senate. This, according to her, will afford her the opportunity of extending her the tentacles to facilitate more dividends and developmental project not only to the district but to the state and Yoruba land generally.

A leader with many parts and rare leader with a difference, the large heart she has earned her the sobriquet, ‘Obinrin Ree’, Virtuous Woman. She has imprinted marks too difficult to erase in the history of legislative representation and good governance in the country. She has recorded a lot of achievements while in office and even after leaving office. She facilitated a lot of electrification projects not only to the urban areas but also to rural areas where couldn’t have been a dream of having electricity. Is it on road construction? She has excellence in it as evidences of these are widespread across the constituency. Water, agricultural projects were also significantly achieved across the books and crannies of the constituency.

Alhaja Amope is a staunch believer in empowerments. She, on many occasions, organised empowerment trainings for youths across her constituency with start-up capital. She did for widows too many times. Her own type of training is one in which the cash to start your business would be given immediately. At the end of the one she did at Cocoa Research Institute of Nigeria (CRIN), Ibadan in 2013, each participant got #100,000.00 immediately in the presence of Hon. Mongunu, who was the chairman of the House Committee on Agriculture. Apart from the 2012 edition, so many were organised for hundreds of participants whose lives have changed positively.

She has built and empowered nations through the unprecedented provision and facilitation of Federal Government job opportunities for youths across the FG’s ministries, departments and agencies. These are jobs that have transformed so many lives and families. This is very unprecedented in our dear state if not in the South-West geopolitical zone. He brought many projects and political appointments to the state through the Federal Government.
Suring her tenure, she gave donations to many artisan, community, student, religious and many more associations in the land.

Is it on personal philanthropy, she is a force to reckon with. The role her nongovernmental organisation played and still plays is unquantifiable. Jokodolu Foundation has been a source of laughter for the afflicted and the troubled. It awards scholarship to indigent students in the society and puts hope to the hopeless. The donations to religious groups is also there to stress.

On sports, she has also contributed. She founded the first female football club in the state to play to operate in that height.
She is a party woman and loves the Peoples Democratic Party (PDP) as her personal business which must not crumble. No wonder she has consistently remained in the party for 21 years. What a loyal leader to the party!

Bearing in mind all of these myriads of achievements, I, Sunday Adepoju, an ardent lover of the giant strides of Her Excellency, Rt. Honourable Mulikat Akande-Adeola, former majority leader of the House of Representatives, hereby wish our good ambassador and leader a happy birthday full of joy, peace, success, uplift, blessings, and all the good wishes she deserves.

A Poem From Sunday to MAA

Up thy abode, up thy abode
Thou hast paid your dues
To raise the lowly, the poor
The weak, the afflicted, and lot more and more
When God distributes the gains
Almighty God will reward you abundantly
May Almighty grant your family peace unlimited
May He accept all your prayers
Both secrete and open
May the prayers of the nation’s you’ve built follow you
Amen and Amen