Home News Ten Injured as group attack OPC members in Ibadan
Share on Facebook
Tweet on Twitter
No fewer than ten persons were seriously injured during violence that erupted in Omi-Adio community of Ibadan, the Oyo state capital, on Monday evening.
The violent clash was between members of a notorious gang called “Gobe” and members of the Oodua Peoples Congress (OPC) in the Omi-Adio community.
Trouble started when about twenty members of the “Gobe” gang, attacked some members of OPC at Ido junction on Monday evening.
One of the OPC members, identified as Adigun, was seriously injured with dangerous weapons such as cutlasses, machetes, and broken bottles.
Our correspondent learnt that members of the gang had drawn a battle line with OPC members for allegedly disturbing their operations in the community.
Eyewitnesses informed our correspondent that apart from the OPC members, the rampaging “Gobe” gang members also inflicted injuries on passers – bye, who came to board commercial motorcycles back to their homes at the Ido junction after the working hours.
It took the intervention of a team of policemen from the Omi-Adio police station before the violence was prevented from escalating, as OPC members in the community had already mobilized themselves.
Chairman of the Otunba Gani Adams led OPC in Ido local government area, Comrade Muritala Ifawale Adekola (a.k.a E le omo buruku danu) reported the attack on his members to police at the Omi-Adio police station.
On sighting the OPC leader in company of a police team storming the scene of the attack, the attacking “Gobe” gang members immediately took to their heels, dropping some of their weapons on the ground.
Speaking with newsmen who visited the Omi-Adio community on Tuesday morning, Comrade Muritala said members of the gang are criminals who OPC had in the past apprehended and handed over to the police for various criminal activities in the past.
Muritala added that on returning from either police net or prison, the criminals organized themselves into a gang under the leadership of one Sarafa Gobe to wage war against OPC members in the community.
ALSO READ  Buhari Nominates Edward Adamu As CBN Deputy Gov 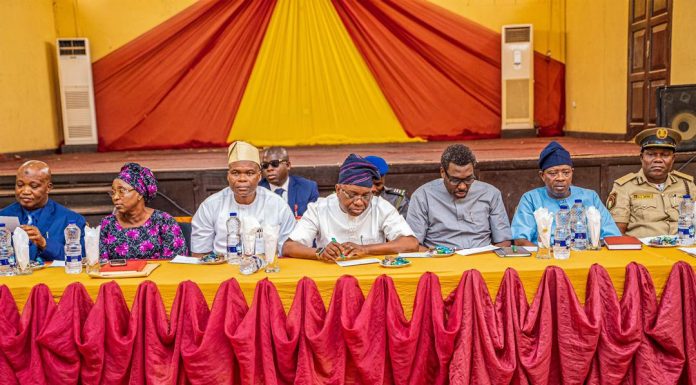 Youth Parliament Adopts Motion on the Need for FG to Acess ADB’s Grant for...