Home News ServerGate: Whose Interest Is INEC Serving?.By Ifeanyi Izeze
Share on Facebook
Tweet on Twitter
The news today, Monday 29th July, 2019, that the Independent National Electoral Commission INEC, failed to call witnesses to counter claims of malpractices against the commission by the Peoples Democratic Party (PDP) and its presidential candidate in the February 23 presidential poll Atiku Abubakar, must have come as a rude shock to all Nigerians seeking to know the truth, the whole truth and nothing but the truth in this #ServerGate controversy.

The electoral body, the first Respondent, was supposed to call its witnesses, Monday but rather announced to the court that the commission does not have any witnesses/evidence to present and would rather rely on the proceedings at the tribunal as its defence. In what looks like a dramatic turnaround, INEC chickened out at the hearing of the Presidential Election Petition Tribunal (PEPT).

Now, INEC is the main culprit, they announced Buhari as winner and yet have no witnesses, no forms nor backend (as they have chosen to call server in the Chris Uba vs Ifeanyi Uba vs case in Anambra) data to tender? Is this not curious?

Glaringly, the commission has no one to confirm its denial of the existence of a backend server used in its electronic collation of results. This is an obvious sign that the commission is overwhelmed by the convincing evidence/testimonies of witnesses presented by Atiku and the PDP.

INEC should be meant to understand that opting to respond to the allegations and issues raised and established by the petitioners just by written addresses simply to avoid cross examination, is at best being clever by half and the PEPT should not allow this because it’s not only dubious, it is equally criminal as the people of Nigeria deserve to know what transpired and how INEC arrived at the decision to announce Buhari as winner of the poll.

The public is aware that contrary to what INEC would want Nigerians believe, data forensic experts at the PEPT were able to successfully establish that figures being bandied around by the commission for the February presidential poll defies mathematical and statistical logic mostly in the southern region of the country due to electoral manipulation.

The data shows that the election was heavily manipulated in the Southern part of Nigeria. A turnout ratio that is less than 29.5 percent for the Southern part of Nigeria is not statistically possible. Even the North East that is battling with insurgencies and humanitarian crisis has a turnout that is above 60 percent. So, whosoever orchestrated the manipulation of the election results actually did it clinically to confuse future investigation.

From the INEC data as obtained from the commission’s server, the PDP presidential candidate, Atiku Abubakar won in the South with a margin of 3.2 million. The winning margin would have been more if votes from Rivers state were available. In the North we had (Atiku – 9.23 million, Buhari – 10.68 million) showing that Buhari won in the North with a margin of 1.45 million votes.

A total of 8.68 million votes were depleted from the votes of both Buhari and Atiku nationwide but with Atiku Abubakar being the net loser of 7.09 million votes.

The unlawful depletion of votes is the reason why the election conducted by INEC defies statistical and mathematical rationality.

Logically, a significant increase in PVC collection ought to translate into an increase in voters’ turnout or total votes cast. Therefore, the e-collated result proves a fact that the 2019 election was manipulated.

It is now understandable why some people love to argue that the Nigerian constitution does not recognise e-voting. They are only trying to be clever by half because it is only someone with dubious intentions that would prefer the manually collated result without audit re-confirmation.

Yes, the constitution does not recognise e-voting but e-collation and e-transmission are simply known as process automation. An organisation does not need constitutional amendments to automate their tasks, procedures and processes.

So, it is very clear that the February 23, 2019 Nigerian Presidential poll was rigged. The PDP candidate Atiku Abubakar clearly won the election but INEC has continued to deny him the stolen mandate. But there is no level of intimidation or propaganda overdrive that can deny the obvious. God bless Nigeria! 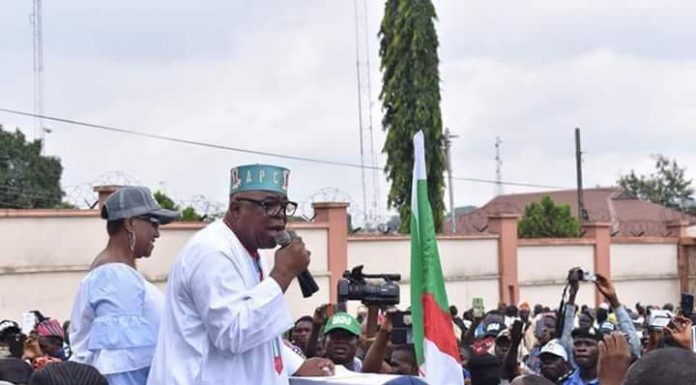