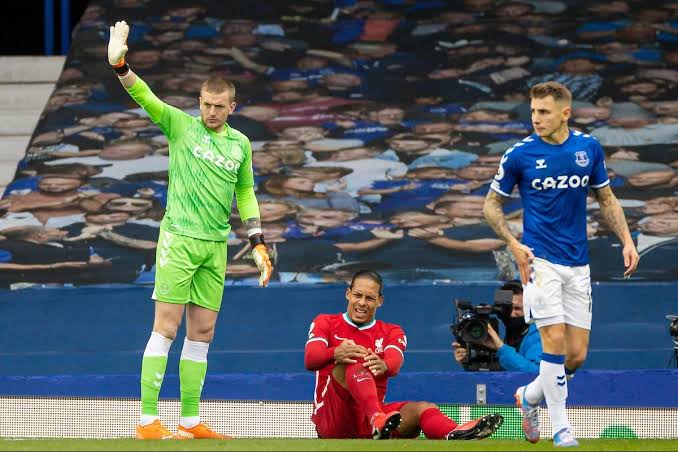 462
SHARES
6.4k
VIEWS
Share on FacebookShare on TwitterShare on WhatsApp

Liverpool defender, Virgil van Dijk will undergo knee surgery and is facing a battle to play again for the rest of the season after test confirmed that the he suffered an anterior cruciate ligament injury during Saturday’s 2-2 draw against Everton.

Virgil Van Dijk was injured in the fifth minute of the 237th Merseyside derby following a challenge by Everton goalkeeper Jordan Pickford, which went unpunished by match referee Michael Oliver and VAR officials.

Although he was able to walk off the pitch following treatment by the Liverpool physiotherapist. According to ESPN, scans confirmed that the 29-year-old Holland player suffered cruciate ligament damage in the incident and, as a result, faces months on the sideline.

In other news, meanwhile, Liverpool are hopeful that an injury sustained by midfielder Thiago Alcantara against Everton does not prove to be serious.

Everton forward Richarlison was sent off for the 90th minute challenge, which caught Thiago on the knee.

Thiago eventually got up from Richarlison’s red-card collision and was able to create the opening for Henderson’s disallowed goal but later reported an injury and was also sent for a scan on Saturday.