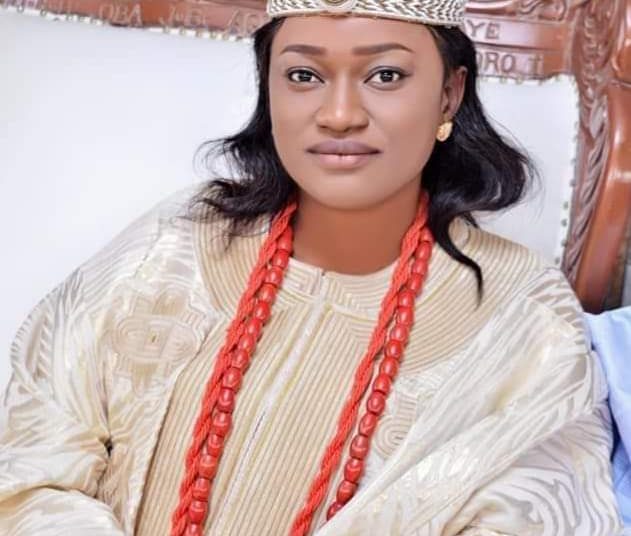 638
SHARES
4.8k
VIEWS
Share on FacebookShare on TwitterShare on WhatsApp 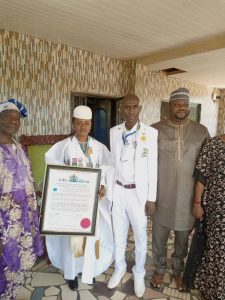 HRM Taiwo Oyebola Agbona, the Regent of  Aaye town in Ifedore local Government Area of Ondo State, was on Saturday  honoured with a award of Golden Fame of 21st Century

The award of excellence, which was given to Regent Oyebola by the International Chartered World Learned Society (ICWLS), on Saturday at her palace at  Aaye, Ondo State was presented to her by UNESCO Laureate, Professor Bashiru Aremu.

Speaking during the ceremony, Professor Aremu said that the award was being given to Her Royal Majesty (HRM) not only because of her educational attainments, but also due to her contributions to knowledge advancement.

Congratulating for the glamorous award of excellence, the UNESCO Laurette, Aremu said, ” this award of Golden Fame of 21st Century was being given to Her Royal Majesty because of her academic achievements, as well as Regent Oyebola’s contributions to educational advancement, not only in Info State in particular, but also in Nigeria in general.”

The Don, therefore, charged her majesty to keep up the good work, adding that the means she needs to do more.

Responding to the presentation of the award, Regent Oyebola thanked ICWLS for finding her worthy of being honoured, while equally commending those who put the package together to make the ceremony worth the while.

“I want to thank not only the society, but all the dramatise personnel who have come to honour me today for this cherished award. I thank you all.”

She continues,” My commitment to knowledge acquisition is due to my believe that education is the key to societal growth and development.

“Not only that, it is also due to my believe in the saying that if you say education is too expensive try ignorance. Afterall, nothing kills like ignorance.”

The Regent, therefore, promised to continue to acquire more knowledge and contribute her quotas to educational advancement.

Concerning her educational development as a child, she had her primary education at Dynamic International Nur/Pry School Akure from where she moved to Police Secondary School, Ita-Ogbolu , Akure.

As someone who is naturally endowed with leadership qualities right from her early years in the school, she has been privileged to lead her mates and colleagues at various times and occassions.

These leadership abilities and intelligence were further tested and demonstrated when she was made the labour prefect in her set. Within all diligence and sense of service she performed her duties.

She proceeded to Achievers University Owo where she studied Medical laboratory Science.

Like a city set on a hill, she soon became popular within her class and beyond,,known for her energetic, intelligence, smartness , confidence and leadership prowess.

All these and more earned her the trust of her lecturers and coursemates and she elected the class representative, a position that was hitherto exclusively reserved for the male folks.

She was in that capacity till she became the Regent of Aaye after the demise of her father, Oba James Babalola Agbona.

ALSO READ  My Angel is 60 by Rauf Aregbesola

Within the short period when she has been on the throne, a great deal of unprecedented strides have been seen in Ode Aaye town. God has helped her to place the name of the town on the global map.

It is being reported that sons and daughters of the town have at one time or the other benefited rare privileges from both the state and Federal Government through her influence.

To continue contributing her quota to the growth of the community and to serve humanity at large, she has put the machinery in motion to launch a foundation to cater for the needs of the Girl-child and rural women after she leaves the throne.

As a devout Christian, she believes God is the ultimate source of all strength and inspirations.