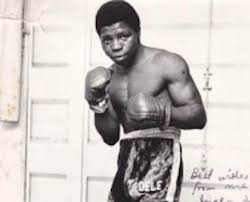 27
SHARES
342
VIEWS
Share on FacebookShare on TwitterShare on WhatsApp

Load More
The newly elected Chairman of Nigeria Boxing Board of Control (NBBofC), Dr. Rafiu Ladipo and former African Boxing champion, Joe Lasisi were full of tears while signing the condolence register of the late former Commonwealth boxing champion, Dele Jonathan
Jonathan died on Saturday April 29th in his Challenge Elewura Ibadan home.
Dr. Ladipo who was accompanied with the secretary of NBB ofC Remi Aboderin and other members with the crew of Oyo State Amateur Boxing Association (OSABA) on a condolence visit to Ibadan over the weekend amid tears described the death of Dele Jonathan as great loss to the
Nigerian boxing family saying it would take time to get his replacement.
The NBB of C boss who was full of gloomy look, pity and regrets while speaking with the widow of the late boxer, Mrs. Adenike Jonathan owning to the circumstances that led to the death of Jonathan pledged to do everything within his capacity to ensure a good welfare for
other ageing boxers that had done the country proud.
The decease for the past 7 years according to family battled very hard with his health after he was diagnosed for prostate enlargement at the University College Hospital (UCH) where he was only able to pay for
the first phase of his surgery but could not afford the cost for the further medical care.
Also speaking, Joe Lasisi who wept uncontrollable prayed God to be with the family Jonathan left behind, saying they were not as fortunate as the modern day’s boxers who now earn big fortunes from the trade unlike when the likes of Dele Jonathan and himself became continental champions.
The family of the deceased has however, picked November 2017 with no specific date to bury the boxing icon so as to ensure a befitting burial and allow all his children to attend the funeral.