President Buhari Signs ‘Not Too Young To Run’ Bill 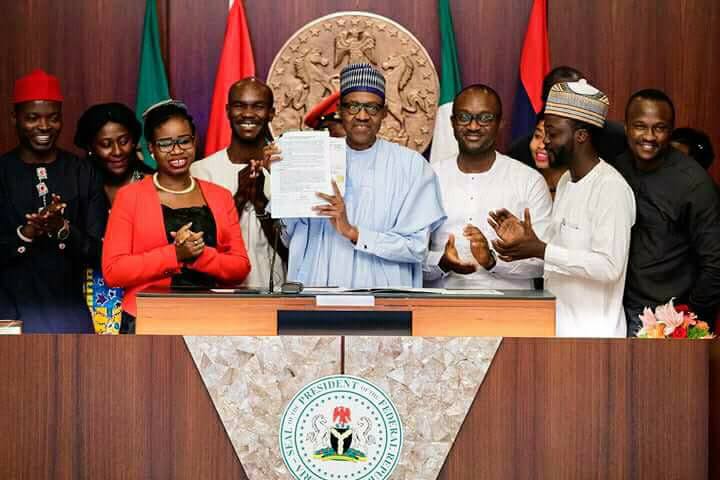 President Buhari  has  assented to the  Not too young to  run bill at the Council Chambers of the Presidential Villa in Abuja, the nation’s capital.

The Personal Assistant to the President on New Media, Bashir Ahmad, posted two videos on Twitter which shows President Buhari signing the bill into law.

Addressing a gathering of youths who witnessed the signing, the President said, “Your focus and contributions have now successfully increased the quality and maturity of Nigerian democracy and expanded the playing field for youth participation in politics.

“You, the young people of Nigeria, are now set to leave your mark on the political space, just as you have done over the decades in entrepreneurship, sports, art, media entertainment, technology, and several other fields.”

President Buhari had promised to assent to the bill while addressing the nation on Tuesday in a live broadcast in Abuja.

“In (a) few days to come, I will be joined by many promising young Nigerians to sign into law the ‘Not Too Young To Run’ bill,” he had said in his Democracy Day’s speech.

Both Senate and the House of Representatives had passed the bill in 2017.

It later received the constitutionally required approval of two-thirds of National Assembly, leaving the final step of presidential assent.

‘Not Too Young To Run’ bill seeks a reduction in the age limit for presidential candidates from 40 to 35, as well as state governors and senators from 35 to 30.

Following the President’s approval, the minimum age for national and state assembly members will now be 25.

The primary aim of the bill is to increase the participation of young people in politics, as more than half of the nation’s population is below age 30.

Tags: not too young run