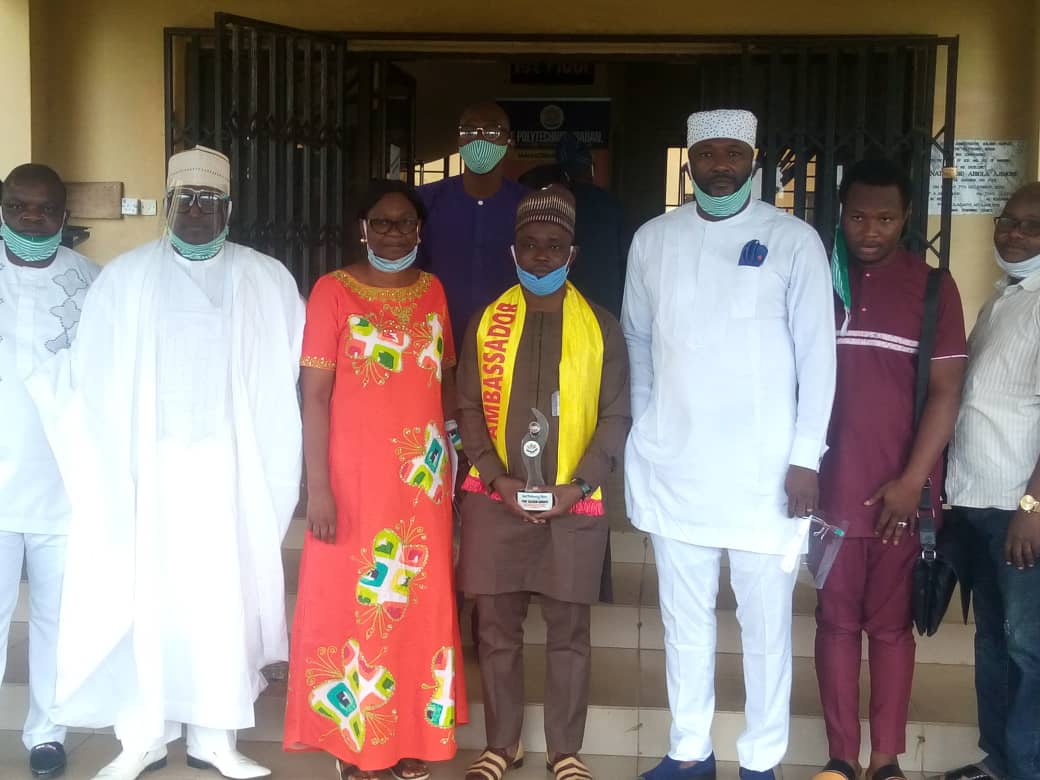 27
SHARES
339
VIEWS
Share on FacebookShare on TwitterShare on WhatsApp

In less than two years in office as Rector, The Polytechnic, Ibadan, Professor Kazeem Adekunle ADEBIYI has bagged the Most Performing Rector in Nigeria award bestowed on him by the Coalition of Civil Society Organizations in Nigeria (COCSON).

Professor Adebiyi was also decorated as an ambassador of Project 20 Million at an investiture ceremony held at the institutions Board of Studies Chamber, Central Administrative Building, on Wednesday.

Speaking at the event, the convener of COCSON and Director General of Project 20 Million, Hon Ikechukwu Chukwunyere, said the determination of the National Executive Committee (NEC) of the Coalition, for a more prosperous Nigeria and the drive to pull the Nigerian economy from the woods informed the decision to honour Professor Adebiyi with the Most Performing Rector in Nigeria award.

He said: In our determined quest for a more prosperous Nigeria and our drive to pull the Nigerian economy from the woods on the principal anchor of translating our vast youth potentials to productivity, we decided at our National Executive Committee (NEC) Meeting which held from Friday 17th-Saturday 18th of July, 2020, to honour Professor Kazeem Adebiyi.

Our amiable Rector, as an organization we have noted your professionalism, interventions and achievements in administration since your emergence as the Rector of The Polytechnic, Ibadan. It is a known fact that before your coming, the last time this institution made any meaningful impact to technology development was far back in 2009 but all these have changed due to your innovations and creativity.

Chukwunyere mentioned upgrading of the television and photo studios and Public Relations and Advert Resource Centre of Mass Communication Department of the institution, and procurement of teaching equipment for the Department of Geology as some of the achievements of the Rector.
He lauded the Adebiyi-led administration for the great feat of getting all the courses put forward to the National Board for Technical Education (NBTE) for accreditation passed, describing the feat as commendable and unprecedented in the history of the institution.

The institution, earlier this year, had presented thirteen courses to the NBTE for accreditation and all the courses were successfully accredited.

The COCSON team, after inspecting the equipment in the studios of Mass Communication Department, described the department as the best having produced notable practitioners who are now captains in the media industry.

The team commended the Poly Ibadan FM Radio initiative which, according to the rector, should have commenced operation but for the COVID-19 pandemic that disrupted the activities of the institution.
The Don, who appreciated the team from COCSON for the award and for making him an ambassador of Project 20 Million, said that the radio station would start operation soonest.

The Rector urged members of COCSON to embark on public enlightenment campaigns and publicize the activities and programmes of the organization so as to gain more members for the realization of its lofty objectives.

He also pledged his firm commitment to Project 20 Million and the expansion of the Coalition to every nook and cranny of the country.

The convener explained further that, the Project 20 Million campaign is aimed at a thorough, purposeful, invigorated, masses driven and grassroots mobilization of 20 million Nigerians that are willing to ensure that only Nigerians who are fit and proper occupy both elective and appointing positions.

He said COCSON is the umbrella organization for all the civil society organizations in Nigeria.

Why i Was Calm When Ajimobi’s Wife Was Angry- Oyo Deputy Gov.

Why i Was Calm When Ajimobi's Wife Was Angry- Oyo Deputy Gov.