Engr. Muftau Ope Salawu,  the Waziri Jari Nupe is a chieftain of the All Progressives Congress APC in Oyo state. He served as Special Adviser on Work and Transport to the immediate past governor of the state, Senator Abiola Ajimobi . In this interview With Remi Oladoye, he spoke on the need to sensitize Nigerian on the modus operandi of Operation Amotekun.

Do you support the formation Amotekun?

It is not a case of supporting Amotekun or not, the first question is do we have security challenge in the southwest, yes we have just like any other region that has security challenges, the bandit, the kidnappers and other crimes and for anybody that has been a victim of this insecurity, such person will usually see any measure that could improve security situation as a solution but again it  must be within the confine of the law.

As a member of the ruling party, what can you say about the decision of the federal government to declare operation Amotekun illegal?

You see if there is any breakdown of law and order in any part of the nation,  it is the Federal government that will be worried most, but what the Federal government is saying is that of there will be Amotekun it  must have a legal backing so that it will not be a case of having a parallel police or a situation whereby every region will have a similar thing, but I know the idea behind Amotekun is not to have a parallel police but to assist the policing architecture in the southwest . It is true many people are worried about the operation modules or what it is going to look like but I think there should be more awareness before the launching of  Amotekun itself  so that people will know that it is about  supporting the existing security  architecture not to create a parallel one, you will agree with me that situation in the south west in term of security is not too encouraging but I think our governors can do better most especially those  of the governors that of the same party with the Federal which is APC  can sit down and have a proper understanding on how best  to run this programme and to have a better result so that it will have a back of the law and a smooth operation  without having any conflict  or without anybody worried about the way it will be operating

What do you think should be done to make operation Amotekun effective and sustainable?

First and foremost, the governors should have a proper and clear operation modules publicized and get a backing from various state assembly so that it will be passed into law that such an organization exits and an  appropriation would be made for it, it won’t be a case of  why Governors will do  it unilaterally without the backing of the legislatures and I believe if that is done the Attorney General will not have any problem with that, For attorney General , its normal for him to say what he has said   because he cannot fold  his arm and watch that part of important exclusive lists been exercised by regional state  and don’t forget it is not only south west that has security challenges  but it is just the south west governor that takes the first step which if the Attorney general did not make any pronouncement I can assure you that other region with take similar steps and which he could become messy but again the south  west governor will not fold their arms and be watching as well for security situation to be so deteriorated that you cannot even travel from Ibadan to Ondo state.

Miyetti Alla said South West will lose presidency slot if Amotekun is allowed. Do you see its creation as a whole threat?

Miyetti Allah are social cultural group and I think they are just trying to protect the interest of their members and make themselves also relevant in the political cycle if not they don’t have the power to determine who becomes the president of this country, as a matter of fact, no region can determine or can win the president election alone, it requires two to three region to form alliance to be able to get the required constitutional vote to win presidency election. People from southwest are civilized, logical in pursuing the interest of the southwest and I will employ all the spokesperson of different group in the southwest  to please try to caution themselves , to desist from inflammatory statement that could make the situation worse, we all need one another, the Miyetti  Allah make some statement that are not pleasing to us we don’t need to be reactive , we are being very proactive about this measure but again we still need to discuss about it so that it will be acceptable to other region, mind you security is a very serious issue and its everybody’s concerns but everybody want to be in a very secured environment, it is when the environment is secure that other things can thrive, so I will say that people should try to guide what their utterances will be at this moment, it is not about next election, it is about the current situation, there can’t be next election of there is no peace, so please let us try to be civil. 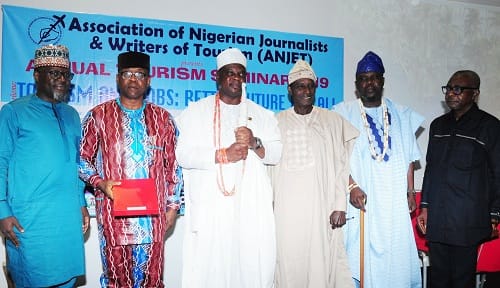 Olota of Ota, Akinboboye, Olowo, Others Task FG on Tourism

International Day of Girl Child: Young Girls Should Brace up , Live in the World of Positivity- Prof Sonaiya