Amid fears that the election results in Oyo South senatorial district may be manipulated, the Peoples Democratic Party, PDP, in Oyo State has warned the Independent National Electoral Commission, INEC, against succumbing to pressure.

Dr Mohammed Kola Balogun, its candidate, is leading in the district, though results are yet to be officially declared by INEC.

In a statement in Ibadan, the Oyo State capital, by its chairman, Alhaji Kunmi Mustapha, it said that PDP recorded great success going by the results sent into its situation rooms by its agents and supervisors deployed for the election.

This is just as the party said it is aware of plans to influence results from Governor Abiola Ajimobi’s Ibadan South West local government to augment their deficit. The ruling party has also arm twisted INEC to declare Ibarapa North/ Ibarapa Central inconclusive which is strange to democratic ideals and processes.

“We are calling on INEC to be steadfast and not allow its men to be compromised by Governor Abiola Ajimobi and the All Progressives Congress led federal government especially in Oyo South senatorial district.

“With the results at our disposal and verifiable by all INEC  standards,  our party is comfortably leading the All Progressives Congress, APC, candidate in Oyo South. This is apart from the fact that we have recorded victories in four out of the five federal constituencies in Oyo South- Ibarapa East/Ido; Ibadan North East/ South East; Ibarapa Central/North and Ibadan North West federal constituencies. We are only waiting for the official declaration by INEC.

“Since morning, we wouldn’t know why the results declarations have been delayed when they are ready. We have it on good authority that Governor Abiola Ajimobi is mounting pressure on some Abuja forces to save him from defeat. But any attempt to subvert the wish of the majority of the people of Oyo South will be anti-democratic. We will like to, at this juncture, encourage the Resident Electoral Commissioner, Barr Mutiu Agboke, not to be intimidated by the pressure.

He should call his men, especially the Returning Officers to declare the original results from each of the local government.

“As we write, security agents have sent away supporters of our party from the collation centre while known members of the All Progressives Congress, APC, are allowed access within the premises. This is after declaration of results from each of the remaining 7 local government areas have been stopped, without any tangible reasons.

“While we are confident of victory, we wish to appeal to our teeming members and  thousands of people who defied all odds, and rejected the APC’s vote-buying techniques to be calm. We believe that our candidate has won and nothing can change it.

It is not about the amount of government money that you own,  but what you’re able to do for the common man that matters 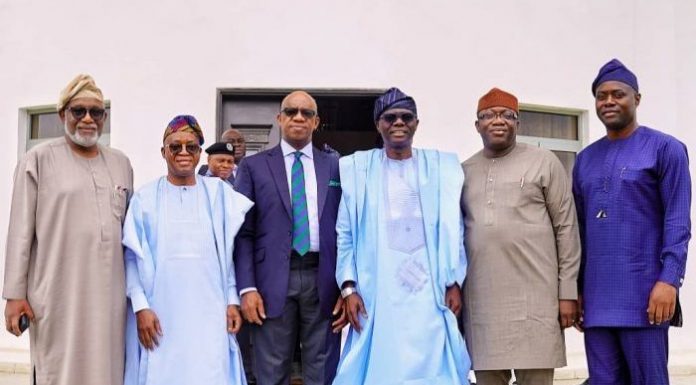 Please Help Me I Want To Go Back Home, Nigeria Lady in Omar...

Suspensions in Ekiti House: The imperatives of discipline BY STEPHEN GBADAMOSI