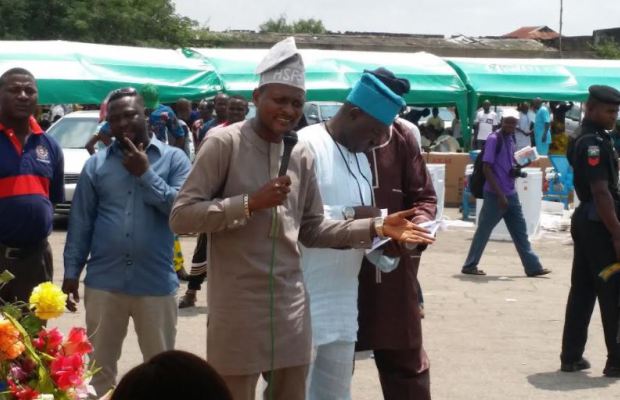 Four students, selected from the University of Ibadan and The Polytechnic, Ibadan‎, were lucky as he assisted them with scholarship to further their studies abroad.

This is just as ‘Radical’, as the former president of the National Association of Nigerian Students, NANS, is known, empowered other constituents with equipment said to be worth N20 million.

Among the items distributed by Olaleye, who is serving his second term in the Assembly, are grinding machines, freezers, generating plants, football jerseys, exercise books, sewing machines, financial assistance to traders and a brand new Toyota Camry car.

Speaking at the event, the lawmaker urged public office holders in the country to be more sensitive to the yearnings of the downtrodden, to make democratic governance more meaningful to the people.

According to him, the empowerment programme was in fulfillment of his campaign promises to his constituents.

“As a two-term member of the State House of Assembly, I initiated programmes and policies aimed at alleviating the sufferings of the people.

“Today, I have not changed; we all know the economic situation in the country,” he said, noting that many people were facing hardship.

“I feel that this empowerment scheme is apt because there is no better time for this kind of gesture than this very moment,” the lawmaker said.

He said legislators had the constitutional responsibility to represent their people in the parliament, make meaningful laws and give the governor the required support in his efforts at transforming the state.

The lawmaker said he had also executed some constituency projects, which had been inaugurated earlier on Thursday across his constituency.

Olaleye, who used the occasion to declare his intention to contest the House of Representatives election in 2019, appreciated the governor for his usual support to the Assembly.

He said that the people deserved good representation, which he would continue to give at any level he found himself.