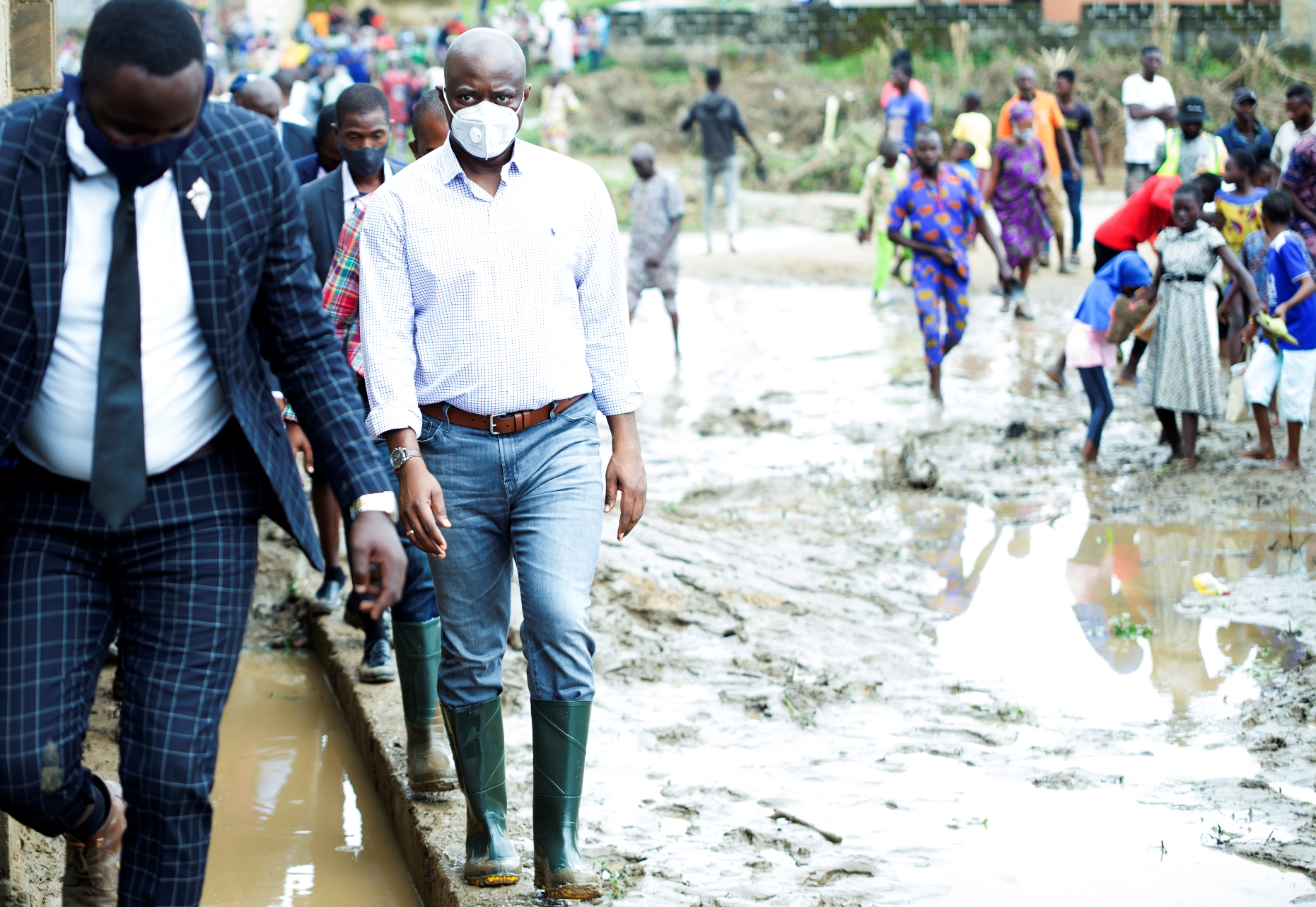 Oyo State Governor, Engr Seyi Makinde (middle); and others during the governor's inspection to some flood area in Ibadan. PHOTO: Oyo State Government

Oyo State governor, Engineer Seyi Makinde, on Wednesday directed the execution of a drainage masterplan under the Ibadan Urban Flood Management Project within the next 18 months.
The governor, who gave the directive while on an on-the-spot assessment of the flood affected areas of Ibadan said that the measure would help prevent perennial flood disaster in the state.

The governor, on a tour of the areas including Oke- Omi, Ikumapayi, Olodo and Onipepeye Bridges at Sawmill all in Ibadan on Wednesday, added that he has directed the Local Chairmen in the areas to begin work on the affected bridges immediately.
A statement by the Chief Press Secretary to Governor Makinde, Mr. Taiwo Adisa, quoted the governor as further declaring that the Ministry of Environment should enumerate the properties affected by the flood at Olodo area with a view to relocating some of the residents to other areas.

He said: “Like we can see out there, the bridge is undersized. There is a drainage master plan for Oyo State under the Ibadan Urban Flood Management Project (IUFMP), this has been identified and I think we have to keep taking them out one at a time. So, I have asked the local government chairman to write for approval, and work will start immediately on it.

“IUFMP is already dredging the river. The remaining thing is just to put a properly sized bridge across it and we will do that.
“By the time we are able to get all the projects under the IUFMP executed, the issues of flood will be dealt with and it is only then that the rainy season will not be any problem for us. It is work in progress and I believe that, in the next 18 months, there will be appreciable improvement and our people can sleep with their eyes closed even if it is raining heavily.
“On structures obstructing the waterways, we will have to take some of them out. At the main road at Olodo, some people already moved out by themselves. So, the government will enumerate such properties and then see how we can relocate people there.”

The  governor also enjoined the people to desist from actions capable of aggravating flooding, including dumping of wastes in river channels and waterways, which he said may result in the blockage of drainage and river channels.

He urged people living close to flood-prone areas to vacate the areas to avoid loss of lives and valuable properties to the flood, promising that his administration will continue to give succour to those affected by flooding.

He said: “Palliative is general. We are faced with a pandemic and we are also faced with an economic meltdown. So, palliative is something that is continuous for all the people,” he said.

Some of the places visited by the governor included Garage Olodo, Ikumapayi, Oke Omi, Omi River, Under Bridge Onipepeye and Sawmill, all within the Ibadan metropolis.