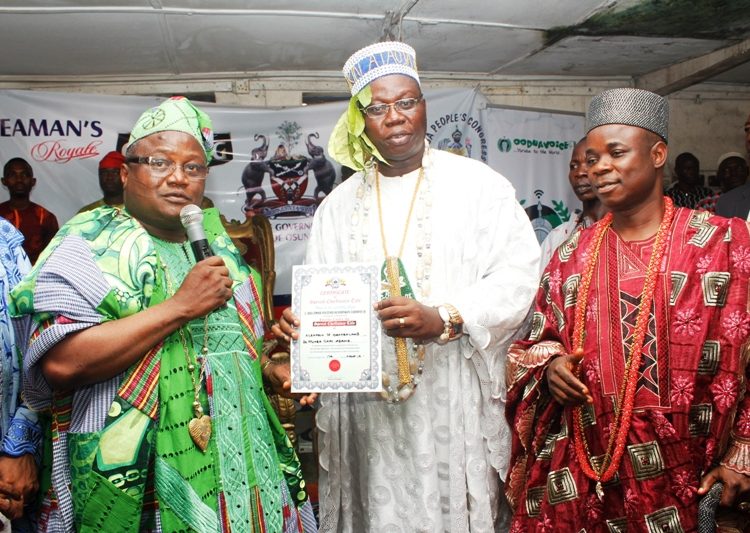 28
SHARES
350
VIEWS
Share on FacebookShare on TwitterShare on WhatsApp

The already heavy nested feather of Otunba Gani Adams, National leader of Oodua People’s Congress OPC as he was today  decorated  as the Agbaakin of Osogboland

The chieftaincy title with is the 49th title in row for the founder of Olokun Festival foundation is to appreciate him for his role in supporting and sustaining the annual Osun Osogbo festival and his effort. In promoting Yoruba culture and tradition

Ataoja of Osogbo Oba Jimoh Olanipekun Oyetunji Laaroye 11 while presenting the paraphernalia of office to the National coordinator of OPC said ,  Gani Adams’s genuine interest in protecting Yorubaland is acknowledge and appreciated by all and sundry  and pray for more wisdom and strength for him and the Organization

Otunba in his response said the honour done to him will encourage him to be more committed and do more for Osogbo and the entire Yoruba race.“ I never knew what  it will result into this when we started , i was fighting and promoting the interests of Yoruba race  and  today the effort is yielding positive result, the awareness is increasing on daily basis and  I am indeed very grateful to God  everybody for their support”

Scores of traditional rulers from different part of yorubaland, eminent personalities and others graced the ocassion.