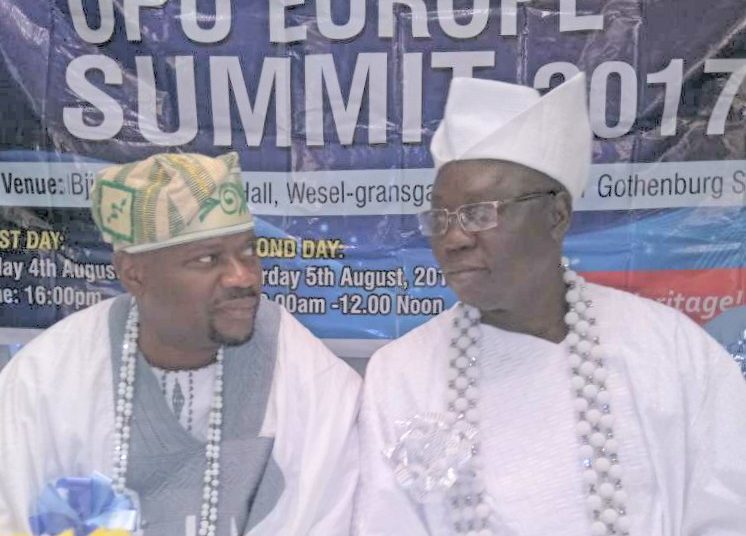 The Odua Progressive Union  Europe has called for the immediate restructuring of Nigeria along regional line to enhance the development of the country and rescue her from imminent crash, just as Otunba Gani Adams suggested the adoption of “mutual understanding and Compromise” to make her democracy workable.
In a communique issued by the socio cultural body  of  Yoruba natives in diaspora under the umbrella OPU, after its 3rd Europe Summit in Gothenburg, Sweden at the weekend, the group, among other decisions “supports the call for restructuring and devolution of power” even as it also “ globally seeks, wants and supports that Nigeria be structured via regional line”

The body also called on Yorubas in diaspora to be  evangelists of the Yoruba culture and ensure that the interest of the Yoruba nation is protected at all times.
It lauded the collaboration of its sister body, Odua Peoples Congress(OPC) with the Nigerian Police to flush the dreaded Badoo cultist group out of Ikorodu in Lagos state.

The Europe Cordinator of Oodua Progressive Union, Chief Victor Adewale, while welcoming delegates to the 3rd historic Europe Summit of the Oodua Progressives said “It is an understatement that Nigeria is a failed nation, and there is urgent need for all stakeholders to come together and determine how the future should be tackled, the numerous issues confronting the nation should be addressed and all agitations from various interests should be promptly treated”
According to him, “the position of European Union of OPU is clear, we throw our weight behind those who clamor for regional integration so that Nigeria will be restructured via regional lines using the six geo political zones as a model. Devolution of power from the center to regions should also the song on our lips now”

Insisting that OPU has a role to play in reshapening the country, the OPU chief said the group is” mindful of what is expected of us despite the fact that we are outside the country, and for now we don’t have voting rights,but our voice, position and recommendations can influence what is happening at home.”

OPU Convener and National Coordinator of the Odua Peoples Congress (OPC) Otunba Gani Adams in his keynote address, expressed the pleasure  to re-unite with his fellow natives in the Diaspora, and according to him,  no doubt,OPU has provided a veritable platform  for the Oodua descendants living  far away from their home land to constantly interact on issues of common interest, especially as it affects the Yoruba race in particular and the country, Nigeria in general.
Speaking further,Otunba Adams said “It is a thing of joy for me to bear witness today, to the tremendous progress that OPU, as a body, has witnessed globally as it now operates effectively in 78 countries of the world.

He however observed that even as OPU Europe celebrate  and click glasses for its success  so far,” it is unfortunate that  we can not do same over our country Nigeria where things have seriously retrogressed” he lamented.
The consolation , he said, is that, “the efforts of all of us here, if offered in unison, can salvage our country from  imminent crash”

He thus canvassed for the adoption of “ mutual understanding and Compromise” strategies used by the Swedish to accomplish the political and economic progress being witnessed in their democracy.

In his submission, when the Swedish Social Democratic Party came into power in 1932, its leaders introduced a new political decision-making process, which later became known as “the Swedish model.” The party , he said,took a central role, but tried as far as possible to base its policy on mutual understanding and compromise.
“There is no gainsaying that Nigeria has what it takes to be a welfare state in its real sense with her natural endowments, but she must   take a cue from Sweden and  adopt the main ingredients of her body polity which absence in the Nigeria system have  remained its albatross -mutual understanding and Compromise.

“It is my candid opinion that only if we had been able to factor and accommodate these two ingredients into our governing system like in Sweden, there wouldn’t have been reason for the ear itching call for  the  breakup of  Nigeria as we are witnessing at the moment.” the OPU initiator opined.
Guest lecturer at the event, Saad Muhialdeen, delivered a paper on Leadership and mentoring with which he registered that  leadership is not only about being the head but also about showing direction and positive game changers.

He praised the Yorubas for being the most focal, conscious and well exposed race in Africa. He enumerated the shinning lights of the black community in Europe as being traced to Nigeria and Yoruba in particular. He praised OPU for its effort towards the preservation of their culture and tradition.
Celebrated media practitioner and Publisher of Metronewsng online, Chief Femi Davies who was part of the event also spoke on the use of social media for the branding of OPU and individuals.

ALSO READ  Ladoja didn't reject the crown, he only told us that he won't be available for coronation- Govt

The summit attracted delegates from 10 Europe Chapters, and various Nigeria Union Associations in Europe and was anchored by popular Nollywood star, who is the global Ambassador for OPU, Yomi Fash Lanso