Oba Adeyeye Enitan Ogunwusi, Ojaja II, Ooni of Ife has commiserated with the entire Yoruba race and members of the House Of Oduduwa all over the world over the sudden deaths of their three prominent sons, Senator Isiaka Adeleke, Dipo Famakinwa and Olumide Bakare which occurred​ at different times and locations within a space of three days.

Oba Ogunwusi in a statement signed by his Director, Media & Public Affairs, Comrade Moses Olafare,  said “it is thus saddening that while we were not yet out of the shock of the untimely deaths​ of Dipo Famakinwa who had tirelesslyworked very closely  with the Ooni’s Palace, the Southwest state governments​ and other stakeholders for the much desired regional integration and development of Yorubaland through his Development Agenda For Western Nigeria known as DAWN Commission and a Nigerian Veteran actor, Mr Olumide Bakare popularly called “Oluwalanbe” who had also made colossal contributions to the growth of the globally recognized Nigerian film industry called “Nollywood” that yet another big tree fell, our amiable Asiwaju of Ede kingdom, a Senator of the Federal Republic His Excellency Isiaka Adetunji Adeleke who had in the past meritoriously​ served us as the first Executive Governor of the State of Osun.

“This is indeed a trying period for us to have suddenly lost these three giants who were being greatly enjoyed in their various areas of calling especially at this time when they are needed most.

“The noble efforts of these gentlemen will continue to rank them among our prides forever.

“May their souls rest in peace and may the Almighty God give their immediate families the fortitude to bear the loses as we will all miss and always remember them to have come into this world meaningfully and impactful.” 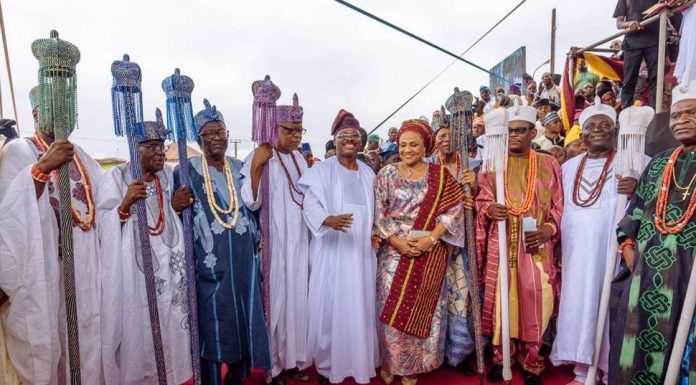