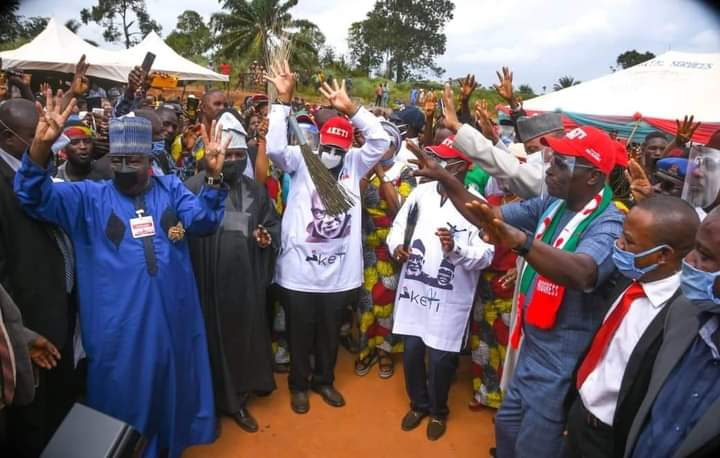 87
SHARES
2.5k
VIEWS
Share on FacebookShare on TwitterShare on WhatsApp 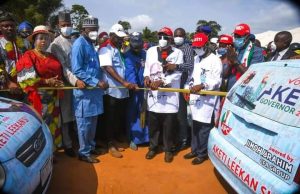 Ondo born billionaire, Dr. Jimoh Ibrahim has said the People’s Democratic Party (PDP) in Ondo State is dead without him as he exits the party for the All Progressives Congress (APC).

Ibrahim was received into the APC by the state chairman of the party, Engr. Ade Adetimehin and handed over to the state Governor, Arakunrin Oluwarotimi Akeredolu SAN, at an event attended by former Governor of Borno state, Alimodu Sheriff.

The business mogul who disclosed that he revived the PDP from the dead said he will use the same strategy to kill the party in the forthcoming governorship election.

He stressed that even if the candidate of the PDP, Eyitayo Jegede SAN, expend all the resources at his disposal on the election, he will still lose to Governor Akeredolu.

He said:”I do not want to sound proud, but i revived PDP in this state. I know how I revived the party and I am going to use the same strategy to kill the PDP.

“I have received the broom from our party chairman here. This night, I will do something. I will give the PDP its poison. I know how I revived the party, I will poison the party to death again.”

The business mogul who said he has tried so much not to talk about the Zenith Labour Party (ZLP), described the party as a pack of fellow betrayals.

”I have tried not to talk about the ZLP. I pray we will not suffer in this life. Where is Zenith Labour Party in this state? The painful thing is that Agboola saw a golden opportunity and missed it. Let me congratulate you Mr. Governor. You are going to win this election with wide margin.” Ibrahim said.

He stated that he joined the APC because of Governor Akeredolu’s gaint strides across the state, particularly his efforts on the resuscitation of the Olusegun Agagu University of Science and Technology in Okitipupa which according to him was abandoned by the former Governor Olusegun Mimiko’s administration for eight years.

He described Mimiko as a man with serial treacherous character, spanning across decades of betrayals of his close friends and political associates.

“Immediately Governor Akeredolu shouted at me . He said that was a bad thing to do. I just laughed. Inside me I said Mimiko will soon show you the stuff he is made of. He is a very treacherous man. Treachery dwells inside him. He can sell anybody. He betrayed Adefarati, Agagu and even sold Jegede.” Ibrahim stressed.

Receiving Ibrahim into the APC, the state Chairman, Engr. Adetimehin said the APC parades an array of leaders of integrity and proven character across the state.

He described the decision of Jimoh Ibrahim to join the APC as one informed by the quality of people the reputation of the party is attracting to it fold.

Governor Akeredolu in his remarks, thanked the people for their decision to join the APC, assuring them that his administration is poised to do more for the people.

Former national chairman of the PDP, Sheriff said the APC is fortunate to have someone like Akeredolu as the Governor of the state.

He urged the people of the state to support him for his re-election bid.