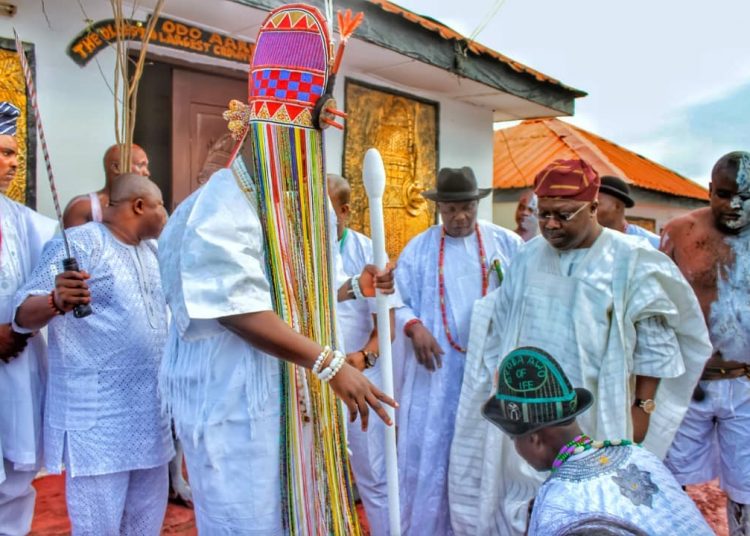 Ooni Ogunwusi is expexted to end the 7-day seclusion on Saturday when he will appear to the public with the Oduduwa’s sacred AARE CROWN traditionally worn once in a year by the Ooni.

The Ooni who is the Co-Chairman of National Council Of Traditional Rulers Of Nigeria congratulated the government and people of the State of Osun for conducting themselves maturely before, during and after last Saturday’s governorship election.

While he praised the government both at the state and Federal level for creating a level playing ground for the people to exercise their franchise, the Spiritual father of Yoruba race worldwide also lauded the electorate for standing firmly on their principles while casting their votes.and specially commended the youths for being agents of peaceful coexistence rather than being agents of political violence during the gubernatorial election.

He praised the politicians of all the political parties for their decorum, he lauded the security agents for their unbias display of professionalism and appreciated the Independent National Electoral Commission (INEC) for conducting the Osun gubernatorial election free, fair and credible.

“We all have now observed through this election that power belongs to the people, by the grace of God, very soon the best candidate will emerge as the state governor of the state of Osun.

“Osun now sets the pace of peaceful political conduct in Nigeria because what presently happens here in our state has never happened in the history of Nigeria for the election has become successful without any blood shed even though it is not yet concluded” Ooni said.

The African foremost monarch urged Nigerians to use Osun election as a template and believe that election can run successfully without using war ammunitions, opined that something good can come out of the nation, saying all politicians must be people’s sensitive, adding that nobody can be taken for granted and people are always ready to fight for their rights.

The highly revered king appealed to Osun citizens to give peace a chance even in the next rerun election affecting just four Local Government Areas in the state. He asked citizens to welcome the winner with excitement as only the God’s will shall come to pass.