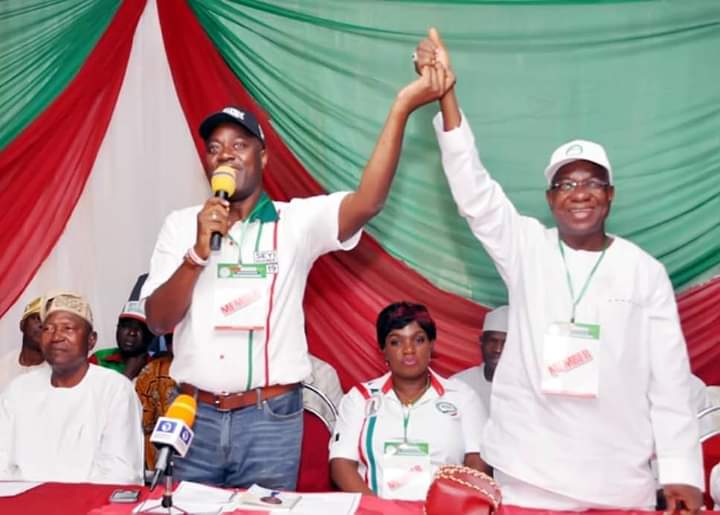 The Deputy governorship candidate of the Peoples Democratic Party in Oyo state Engr. Raufu Aderemi Olaniyan has decried the deplorable conditions of roads in Oke Ogun, remarking that the region has been terribly neglected in the almost eight years reign of the All Progressive Congress in the state.

He said a case in point is the Ibadan Iseyin Road, and the Iseyin- Saki road, to mention a few amongst the many roads in the region that are in sordid conditions.

Olaniyan who was the pioneer general Manager of the Oyo State Road maintenance agency,(OYSROMA) made this remark Saturday in Saki, where he was a special guest of honour at an event marking Saki Day celebrations.

The retired Permanent Secretary in the Oyo state public service noted that it was unfortunate that despite the strategic importance of Oke Ogun, towards helping the state meets it agricultural potentials’ the region continues to suffer neglect, in the hands of successive administrations, more so with the present APC led government.

Olaniyan who is also a fellow of the Nigerian Society of Engineers, however assured that the PDP government to be headed by Engr. Seyi Makinde, will restore Oke Ogun’s pride, by ensuring that the infastructural deficit the region has suffered for so long is corrected. Speaking further he stressed that Engr. Makinde’s administration commencing from May 29, 2019, will pursue policies that will enable Oke Ogun annex its full potentials.

Olaniyan urged the people not to be swayed with sweet words from the ruling party, “ They have been there for almost eight years, we have seen their best and their best was not good enough for Oke Ogun and Oyo State, and their best was not fair to the people of OKE Ogun. He assured people Oke Ogun that the Government of Engr Seyi Makinde will attend to the collapsed roads as a matter of priority come 2019. The Igboho born politician it will be recalled made similar comments at AGO Are OKE Ogun Ajumose Baptist Annual Conference where he also represented Engr. Seyi Makinde as a Friend of the Church.

The highlight of the event, was a donation of two million, five hundred thousand naira, on behalf of the PDP governorship candidate Engr. Seyi Makinde and himself, towards the development of Saki.

Why i Dumped APC for ZLP- Rotimi Ajanaku

Why i Dumped APC for ZLP- Rotimi Ajanaku