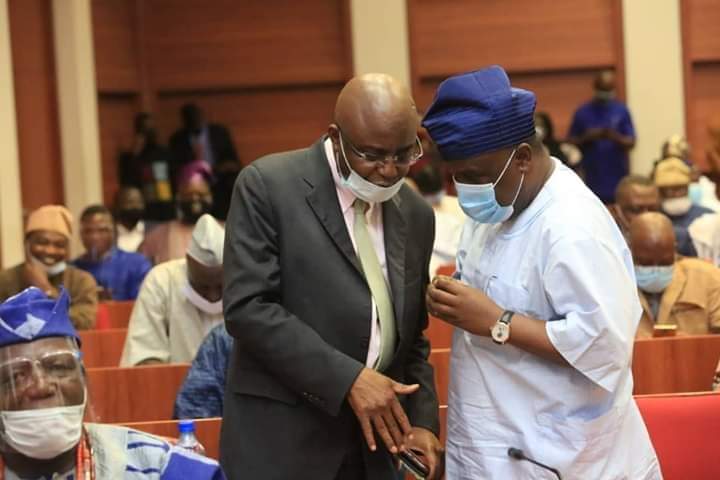 125
SHARES
2.2k
VIEWS
Share on FacebookShare on TwitterShare on WhatsApp

Senator Buhari AbdulFatai has been described as a good representative and reputable voice of the people  Oyo North Senatorial  at the upper chamber of the National Assembly.

A senior Advocate of Nigeria,  Ahmed Raji  said this while  featuring on a radio programme in ibadan.

Alhaji Ahmed Raji noted that Distinguished Senator Buhari AbdulFatai’s efforts on a Bill for an Act to Establish Federal University of Agriculture and Technology, Oke-Ogun is an unprecedented feat after many years of neglect by government.

While correcting an impression on his remarks during a courtesy visit to the Senate President after the public hearing on the bill held on July 20th, 2020 at the National Assembly, Ahmed Raji (SAN) stated that he was just appreciating Senator Ahmed Lawan (President of the Senate) for his support to Senator Buhari on the Bill and urged him to make sure the bill is passed and assented to by Mr President.

” You see, after the public hearing, we paid a courtesy visit to the Senate President, I appreciated him for the support on the bill and urged him to make sure that the bill is passed and assented to by Mr President. I also prayed and wish that when it is the turn of North East, if God wishes, he would visit the Oke-Ogun University as a President (Visitor) and by then our Senator Buhari would be the host Governor. Nobody talks about 2023, I said if God wishes, not 2023 but in future. And those who misunderstood me and quoting me out of context, do they know we exist in Oke-Ogun before Senator Buhari did this?, I only appreciated those who are helping us.” He concluded.