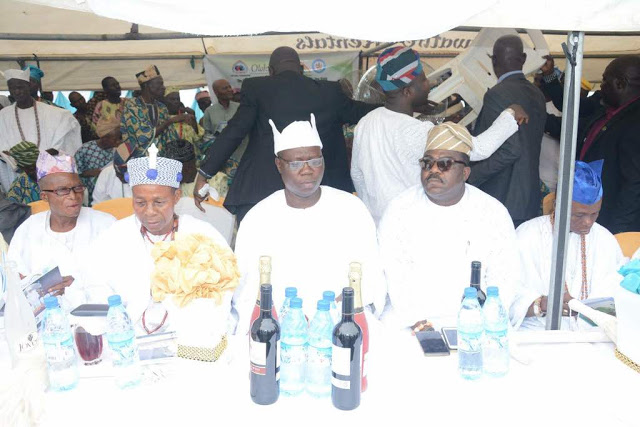 Chief promoter of Olokun Festival Foundation (OFF), Otunba Gani Adams said Nigeria has all it takes to become the major tourism destination in the world if government at all levels harness the tourism potentials that abound in the country.

Otunba Gani Adams while speaking at the Obatala Festiva in, Igangan, Oyo State at the  weekend maintained that ” this is a cogent call at a time like this when tourism is a huge business across the world even as oil reputation is declining all over the world. ”

The National Coordinator, Oodua People’s Congress (OPC) told while talking about the essence of Obatala Festival, said “Obatala is the African god of purity, who is mostly venerated all over the world. Some of his names include Olufon, Orisa la, Orisha-Popo and Orisha Nla otherwise referred to as the maker or creator of the earth and sculpture. Obatala, is the owner of all things that are white. He is calm,  wise, understanding and loves peace and harmony.”

The Oosanla, is the supreme deity that was sent by Olodumare from heaven to earth in the beginning of time when the entire world was nothing but water. He created the land over the water beneath the sky and founded the earth.

Gani Adams recalled that his foundation has remained committed to their ideals over the years. It is passionate in its commitment to make gods happy with us because we have remained focused, dedicated and resolute on this course.

” We have demonstrated and proved beyond doubts, our resolve and determination in breaking new grounds in our quest to project Yoruba cultural heritage to the world. All these are the rewards for our courage and purposefulness in the pursuit of our dreams as an organisation.”

In his words, His Royal Majesty Oba Lasisi Adeoye, Asigangan of Igangan commended Otunba Gani Adams for his unrelenting efforts in the promotion of culture and tourism. It’s not easy to be promoting culture the Otunba is promoting it without any financial support from anywhere, it is high time government should give him all the necessary support to him.

Also spoken at the festival is Chief Ayo Adewuyi, Jagun of Oyo who was the representative of His Imperial Majesty Oba Lamidi Adeyemi, Alaafin of Oyo. Chief Adewuyi said Otunba Gani Adams has done what no Yoruba has done in the history of Yoruba, he established the structure of Oodua Progressive Union in about eighty countries, this alone is worthy of commendation. We should eulogize and commend him so that he can do more.

Other personalities present at the festival were HRM Oba Okeniyi Ewuola, Ashawo of Ayete, HRM Oba Samuel Adewuyi Onidofin of Idofin, HRM Oba Fasasi Adekunle Onisangaun of Saganun, Chief Adedokun Jacob Regent of Elenpe Tapa, Chief Raheem Adelodu Bashorun of Iseyin Land and other five chiefs from Iseyin who were there to represent Aseyin of Iseyin, Chief Femi Davies, Publisher of Metro News/Consultant to Olokun Festival Foundation among others.