Ladoke Akintola Was Never a Tribalist, He worked for Nigeria’s Unity- Daughter 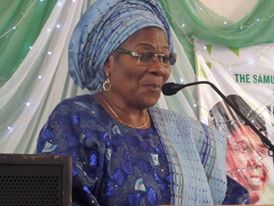 0
SHARES
7
VIEWS
Share on FacebookShare on TwitterShare on WhatsApp

Dr.  Bimbo Akintola   a former minister,  daughter of the 13th Aare Ona Kankanfo of Yorubaland and the last Premier of defunct Western Region, Chief Samuel Ladoke Akintola, in an interview with National Insight crew after the 2018 edition of Ladoke Akintola memorial anniversary lecture in Ibadan, the Oyo state She, also recalled how her father was martyred by the military.

Can we know the importance of what we are doing today?

I have been very pleased and I thank God for today because it’s a day I have dreamt about, I have thought about but it has not happened. I was not in Nigeria when my father was martyred. I was in Dublin, Ireland reading medicine and I have two years more to go when the incident happened. At that time, the papers in Europe were writing that there wasn’t a soul left in the house, everybody there was killed. So, you can imagine how I felt then. And it was only myself, and my late brother, Victor Ladipo Akintola who was at that time sitting for his exams to become a chattered accountant which by God’s grace he became and lived to use it for sometimes before he passed on. We used to think and say to ourselves then in Dublin, that Ladi, it could be you and I that are only left as the papers reported in Dublin. Because my brother,  Akintola, who is late too and the first Africa to go to Hilton College, he too was in the house with my father, my brother Abayomi Akintola was in the house before my father went out and he was shot by the Military people. But, we thank God uncountable times for seeing today, for seeing that my father can be appreciated again, for seeing that people can realize that he did something for this country, for people seeing and noting that he was a nationalist, a man who did not care whether you are Yoruba, Igbo or Hausa. All he cares to know is, if you are human being and he was his brothers’ keeper.

Political observers are not happy with the way the family is projecting Akintola. As one of the foremost nationalists, they expect he should be ranked with the likes of late sage, Awolowo. What is the family doing to upgrade his status?

I am a Christian, a sound Catholic. I tell you, we don’t begging for honours. Give honour to whom honour is due. Today is one of it, it starts somewhere. We now realised that he was the one who moved motion for the independence. Before, it was attributed to Enahoro. If you leave everything to God , in the end you will get what you want, that’s what the family is doing. We are not going to cajole anybody, we are not going to beg anybody. A lot of things are there that should be done for him that was never done.

You are trying to put a finishing touch to the country home in Ogbomoso, what exactly informed this decision?

You see, the country home, as people came and went no one was interested in it. But suddenly we said to ourselves we have to do something about it and we started renovating it. We intend to put a library, a museum, put his clothes , his books and my mother’s things. All the things that would bring memories, reactivate people’s memories that’s what we are doing there.

Today, a lot of dignitaries paid glowing tributes to the late Chief Samuel Ladoke Akintola, how do you feel?

I am somebody who believes in the truth. So, I believe that all those who spoke glowing about him know what he has done for this country and we are very proud of him and they are also proud of him.

Why is Akintola’s children shying away from politics?

Why I’m Contesting for House of Representatives Seat- Engr. Salawu

Why I'm Contesting for House of Representatives Seat- Engr. Salawu