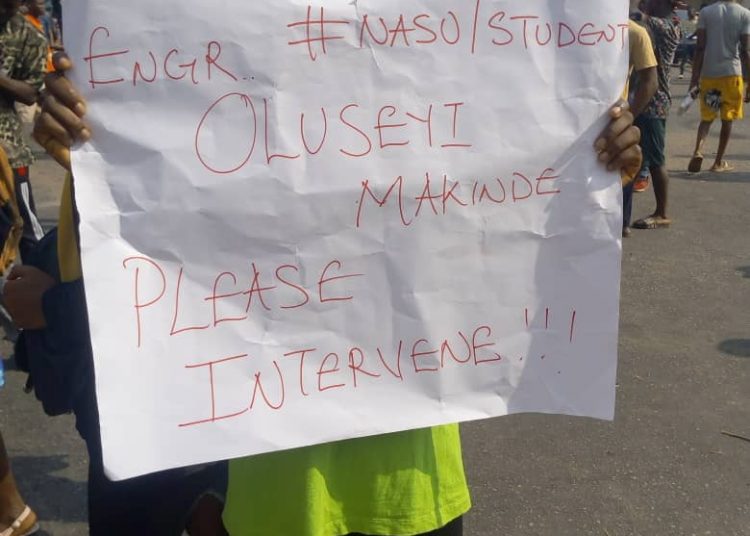 288
SHARES
4.3k
VIEWS
Share on FacebookShare on TwitterShare on WhatsApp

Students of The Polytechnic, Ibadan this morning blocked major entrances of the institution in protest against the industrial actions embarked upon by the staff unions.

They also carry placards with some inscription which reads #NASU Strike Engr Oluseyi Makinde Please intervene” Reach an Agreement the Student Are Affected” and others.

This according to them is to further expressed their grievances to the inability to both the management and the staff union to settle their scores which they say is responsible for the delay in school academic calendar .

It should be noted that the Polytechnic of Ibadan workers started an indefinite strike on monday to press for the implementation of the new national minimum wage introduced by the Federal Government in 2019.

The unions, which comprise of Senior Staff Association of Nigeria Polytechnics (SSANIP) and the Non-Academic Staff Union of Polytechnics (NASUP) announced the industrial action after a joint congress held on Monday.

While speaking to National insight news reporter, a student with name withheld lamented angrily how she had been in ND 2 since, and demanded the Seyi Makinde led government and the School to find solutions to this everyday strike.

The academic activities of the institution after the Christmas break was scheduled to resume on Monday with the start of first semester examinations for the 2019/2020 session but was disrupted by the protest by the unions.

Meanwhile, after some deliberations and suggestions from within, the Students later opened the blockages and allow for the normal free flow of vehicles

Tribute to A Friend And Brother ( Dr Nelson Olalekan Magbagbeola)- A Man in Whom There is no Guile. By Debo Adeosun