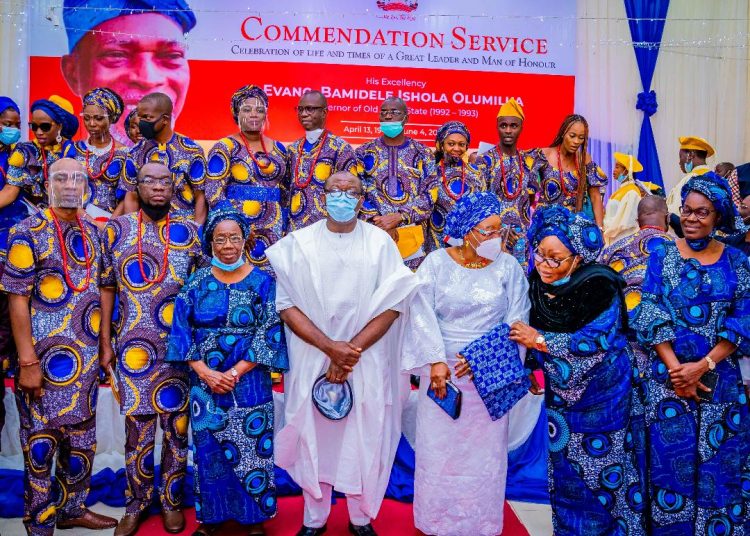 113
SHARES
2.1k
VIEWS
Share on FacebookShare on TwitterShare on WhatsApp

The Governor of Ekiti State, Dr. Kayode Fayemi, on Wednesday paid glowing tributes to former Governor of old Ondo State, the late Evang. Bamidele Ishola Olumilua, describing him as a courageous leader, who was generous and gracious in kindness.

Olumilua, who served as Governor of the old Ondo State (comprising present Ondo and Ekiti States) between January 1992 and November 1993, died in his hometown Ikere-Ekiti on June 4, aged 80 years old.

Dr Fayemi, at a Special Commendation service organised by Ekiti State Government in honour of the late Olumilua at the Adetiloye Hall, Trade Fair Complex, Ado Ekiti, extolled the virtues of the late elder statesman, stressing that he left a lasting impression on him as a great leader with oratory prowess during their first meeting.

Fayemi described Olumilua as a remarkable Ekiti man, one of the great pioneers of post-colonial Nigeria who gave Ekiti the reputation of honesty, dedication, integrity, discipline, simplicity and fortitude.

The Governor hailed Olumilua as an ebullient, sartorial, cerebral, personable, loving and simple personality who confronted challenges that paved the way for contemporary leaders in the younger generation.

To Fayemi, Evang. Olumilua was a man of integrity who was never attracted to greed and avarice and never used his privileged positions for nepotistic advantage.

Fayemi narrated the story of his first visit to Olumilua’s Ikere residence when he visited to inform the deceased of his intent to run for the state’s governorship position on the platform of the then Action Congress (AC).

The Governor disclosed that he didn’t meet the late Olumilua at home during his first visit but dropped his complimentary card, his profile and a copy of his book, Out of the Shadows, which captured his experience in exile as one of the activists campaigning for the revalidation of the June 12 presidential election result.

He said the late politician later told him that the profile and the book influenced his (Olumilua’s) decision to support his (Fayemi’s) governorship project.

Fayemi said: “When I ventured into politics, he was a key leader in our party that I turned to for support. Although I met his absence when I first visited his home in Ikere, I left my complimentary card, a copy of my profile and my exile memoirs, Out of the Shadows. As he later informed me, my profile and my book were the clincher, being a cerebral intellectual himself.”

“He became a big fan of my politics and administration and he never stopped to provide the needed support at every opportunity, even as we disagreed on some issues.

“He treated me like his own son, scolded me when he had to and felt an obligation to my late mother who handed me to him after the demise of my father.

“There is no doubt that he lived a fulfilled man. A measure of this is the fact that one of his illustrious children, Aare Olumuyiwa Olumilua is presently a cabinet member in my government where he serves as the Commissioner of Information and Values Orientation.”

Fayemi noted that one of Olumilua’s greatest legacies was the enlistment of Ondo State as an oil producing state in Nigeria, in addition to working relentlessly to see to the establishment of the Oil Mineral Producing Areas Development Commission (OMPADEC).

Olumilua, he stressed, presided over a star-studded cabinet, which later produced two former governors of the state- the late Dr. Olusegun Agagu (his deputy) and Dr Olusegun Mimiko ( his health Commissioner).

Fayemi identified two major challenging issues for Olumilua’s governorship- the reinstatement of the late Oba (Sir) Olateru Olagbegi II as Olowo of Owo in 1993 as well as his disposition to the clamouring for the creation of Ekiti State from the old Ondo State. Fayemi however said that regardless of the strong feelings of many to his decisions, the late Olumilua stuck to his conviction.

In his brief sermon, Pastor Ola Omosebi urged leaders to learn from the death of former Governor Olumilua by living a life of humility and contentment, noting that everybody will die at the appointed time no matter how great, connected or influential.

Quoting from the Books of Romans Chapter 6 Verse 23, and John 3 verse 16 and 35, Pastor Omosebi stated that the former governor succeeded because he was truly saved and totally trusted in God.

Dr Kunle Olajide who was Evang Olumilua’s main rival in the 1991 governorship primaries of the SDP was one of the dignitaries that graced the colourful commendation service.

Speaking on behalf of the Olumilua family, Mr Olumide Olumilua expressed the appreciation of the family to Governors Kayode Fayemi and Olurotimi Akeredolu and the governments of Ekiti and Ondo states for the roles they played in giving their father a befitting state burial.