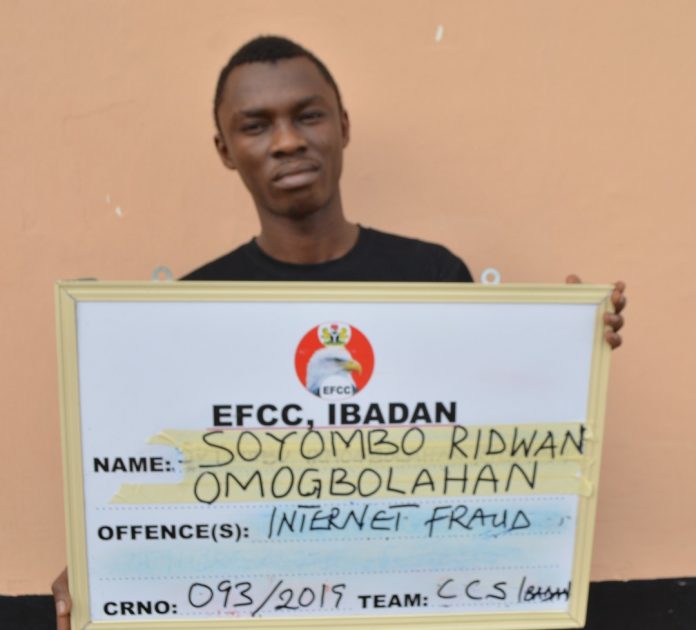 A final year student of Computer Science was on Tuesday, March 26, 2019 sentenced to four months in prison, having been found guilty of fraud in a one-count amended charge filed against him by the Economic and Financial Crimes Commission (EFCC), Ibadan Zonal office.

The convict, Soyombo Omogbolahan Ridwan, was dragged before Justice Ibrahim Watilat of the Federal High Court, Abeokuta Judicial Division after his arrest on February 13, 2019.

The verdict came at a time he was supposed to be mobilised for the mandatory one-year national youth service programme.

Soyombo had settled for a plea bargain with the commission before the initial charges were reduced to one.

The charge that earned him the jail term reads: “That you Soyombo Omogbolahan Ridwan (aka Andrea Norde) sometimes in 2019, at Awa-Ijebu within the jurisdiction of this Honourable court knowingly sent pornographic and indecent pictures with Google Hang Out Account with email address andreanorde19@gmail.com through a computer system and network to one James R. Dunford and thereby committed an offense contrary to Section 24 (1)(a) of the Cyber Crimes (Prohibition, Prevention Etc) Act, 2015 and punishable under Section 24(1) of same Act”
Prosecution counsel, Mabas Mabur, had urged the court to convict him accordingly since he admitted committing the offense and pleaded guilty.

While delivering his judgment the judge said the four months jail term takes effect from February 13, 2019 when he was arrested. The court also ordered that, through the Federal Republic of Nigeria, Soyombo shall forfeit and restitute a sum of USD $700 (Seven hundred United States of America Dollars) to James R. Dunford and Cara Melton, his victims. He will also forfeit his Apple Macbook Air Laptop, One Iphone X Mobile Phone and One WiFi Router to the Nigerian government. The items, believed to be proceeds of his crime, were recovered from him during his arrest.