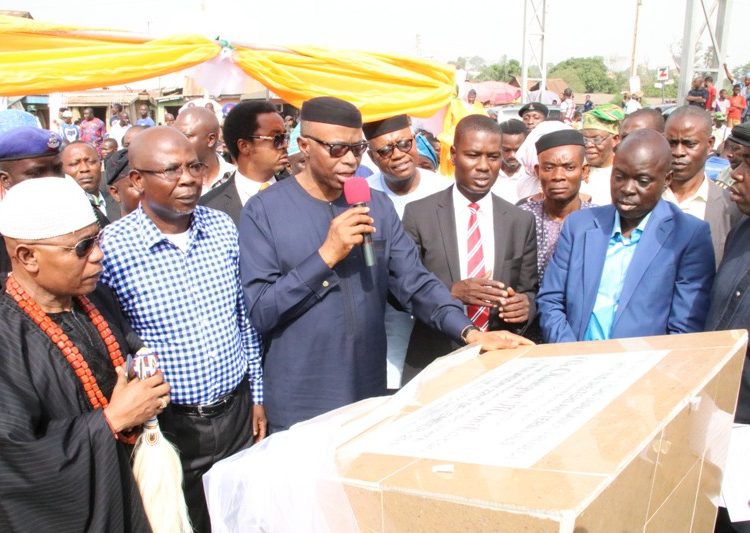 Governor Olusegun Mimiko of  Ondo state on has disclosed that  his administration had expended a total of Fifty-four billions, seven hundred and sixty-two million naira (N54.762 billion) on construction of roads alone since its inception aboout 8 years ago

Dr Mimiko who will be handing over to the Governor elect, Rotimi Akeredolu SAN  in February 2017  said this in during the official inauguration of NEPA-Arakale road in  Akure the state Capital.

“Before the advent of this administration, we were very much aware of the fact that since the construction of Oba Adesida road, in 1977, no other administration has deemed it fit to overlay and add value to the road since then, even though the design life of 25years had expired and adjoining infrastructure, population and by extension vehicles”

Enumerating how much was expended on the road   Mmiko said “A total number of 439 houses was enumerated, and compensation totalling Nine hundred and eighty-seven million, three hundred and fifty-eight thousand, nine hundred and eighty-five naira, sixty-one kobo (N987,358,985.61) only was paid to the affected landlords.  In line with the caring heart agenda of the present administration, traders who were using the buildings marked for demolition were also compensated to the tune of Twelve million, six hundred and eighty thousand naira ((N12,680,000.00) only”.

‘As this project is being handed over today, we have a responsibility to ensure that the serviceable state of this project is not only maintained but also enhanced so that the issue of infrastructural depreciation would be settled”
While charging road users on  proper use and maintenance of the projects , the governor said ‘I appeal to all our people to consider the roads as personal and collective heritage and also a resource, which we all have individual and collective duty to protect and preserve. When we have this mind-set, then we have roads that all of us can be proud of. Our maintenance effort must necessarily be complimented by positive mental attitude of the people.”

Earlier in his remark, the  Deji of Akure, Oba Ogunlade Aladetoyinbo Adelusi  said the  state particularly Akure will forever be grateful to Governor Mimiko for his transformational strides in  al sector.

; We are proud of you, you have make ondo state a point of reference when it comes to development , even the governor elect acknowledge your works and promise to capilaize on it’ the monarch said”