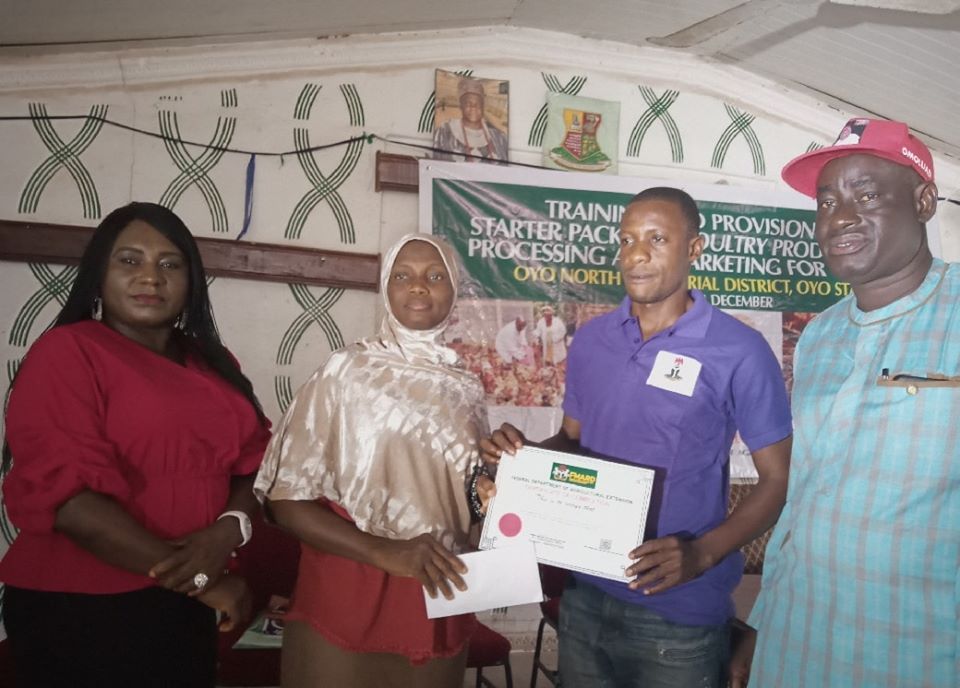 2. Frrom L, Mrs Dorothy Botar, Director Agric, Extension,Federal Ministry of Agriculture and Rural Development , Mrs Baliqis Abdulateef, From Oyo state Directorate of the Ministry and Hon Abiodun Adedeji, Obadoba presenting certificate and cash reward to one of the participant after the training

48
SHARES
348
VIEWS
Share on FacebookShare on TwitterShare on WhatsApp 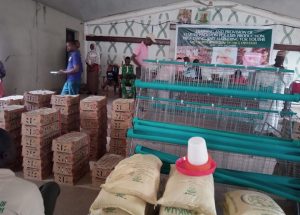 Apart from the training , the beneficiaries were also giving starter parks, 100 birds, cage, 10 bags of feeds and other materials including cash to assist them in starting and improving their business.

The event which was held at Atobatele Hall,Ijeru Ogbomoso was organized by the department of Agricultural Extension, Federal Ministry of Agriculture and Rural Development and facilitated by Senator Abdulfatai Buhari, the lawmaker representing Oyo North Senatorial district at the upper chamber of National Assembly.

Buhari who was the first Senator to be re-elected for two terms from that district is also the chairman Senate committee on Land transport and he has facilitated about 10 training for youths in his constituency in the last 6 months.

Speaking on why he facilitated the training, the lawmaker who was represented by his Senior Adviser on Political Matter, Hon Abiodun Adedeji popularly known as Obadoba said the training is part of campaign promises made by the lawmaker during the campaign.

“Unemployment is one of the major challenges in Nigeria now and as a politician one of the way through which we can assist the youth is assisting them in enhancing their interest, and I believe training like this would boost their morale and allow them to have a good beginning”.

“Participants were drawn from the 13 local governments across the Senatorial districts and base on interest in poultry farming , we are empowering them with material worth about N200,000 and the Ministry officials have agreed to be visiting them constantly to check how they are faring in their business and give them necessary support.

Representatives of the Federal Ministry of Agriculture and Rural Development Mrs. Botar Dorothy in her closing  remark said “The training was purposely organized by the ministry to empower the youths and in taking Agriculture to the next level so that economically they will no longer depend on people but add value to the society

We will continue to monitor the farmers, we also gave them help line that when they have issues they can call, also our staff are already available for them, and we also told them that government agencies in Agriculture will be there for them to ensure that the projects are sustained”.

Olanrewaju Victor, an agriculturists and an instructor at the training said “ I am impressed with the way the responded ,some of them have experience and those who don’t have any experience have gathered quality training on production and marketing in poultry business and I believe in the next six weeks some of them would have been making money from it.

One of the participant, Saka Badmus Oluremi said “I have learnt a lot from this training for people like me who has no experience about poultry business, I do entertained fear about it but with this training my fear has been allayed as we were taught how to do it in such a way that it will be sustainable and profitable, and I can no go home and start my business and I believe in few months’ time I will harvest”

The training which was executed by Hayes Muti-System Limited was also supervised by a team headed by the State Director,Mr Popoola Rasheed Federal Ministry of Agriculture Oyo state, Oyo state Agricultural Development OYSADEP among others.