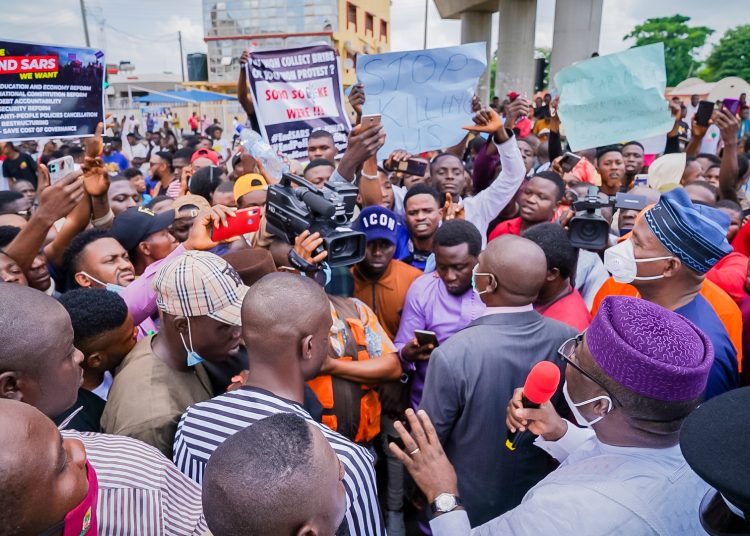 732
SHARES
8.3k
VIEWS
Share on FacebookShare on TwitterShare on WhatsApp

To say that Nigerian youths are agitated today more than ever is to say the least. The youths are at the cross roads due to neglect by the elders. It appears the nation has no plan for its teeming youths. The family unit which supposes to be the primary place for nurturing our youths is in tatters due to economic problem in the country. Many parents are unemployed, underemployed, retired with no pension while some are earning salary that cannot take them home. Financial difficulties have crippled the capabilities of parents to provide basic needs for their wards. In order to remain afloat, youths have taken to yahoo, or yahoo plus, ritualism, armed robbery, kidnapping and all sorts of antisocial activities. As a matter of fact, they are source of recruitment into the dreaded cult and anti-social organization such as Boko Haram and separatist groups like IPOB, etc.

Religious organizations which are another avenue through which our youths could be molded have become something else because the lifestyles of many of the religious leaders are not worthy of emulation. Many of our youths no longer fancy religions. Society in the olden days was responsible for moral upbraiding of youths has abdicated the noble role. A proverb says it takes one to father a child; it takes two hundred men to nurture him or her. Today, it is no longer the case; individualism of modern era has not helped the matter. Man is no longer his brother’s keepers. Government has its own share of the blame because it no longer cares about the plight of Nigerian youths. There is duplication of ministry of youths and sports development in all levels of government in Nigeria with no tangible or pragmatic programme for youth development. It is saddening that many in the leadership positions in Nigeria enjoyed one form of assistance from the government in form of scholarship or free education in their days in schools. Not only were that universities in their days adequately funded but well-staffed with social amenities which met international standard. However, today, university education has become capital intensive with no work in sight after graduation. The budget for the national assembly is more than that of education! Lecturers are no longer keen on providing sound education for the youths but competing with politicians on how to share the national cake. They spent more time at home in name of industrial action than in the classrooms. Many sexually harassed female students or engaged in sex for mark scandal. Students preferred to buy marks than sit for examination. Those who engaged in Yahoo or yahoo plus are riding in posh cars to the school but hunted by the dreaded SARs operatives in a bid to have a share of the blood money.

Life of uncertainties faced by many Nigerian youths due to neglect by the society has forced many of them to flee the country for a more secured life abroad taken the most dangerous and risky route through the Sahara desert. Fortunate ones get to Europe but unfortunate ones perished in the desert or became slaves in Libya. Even, those who get to Europe or Arabian country ended up as prostitutes or slaves. Many at home have become anti-social elements in the society. One million boys in Ibadan terrorizing the neighbourhood of the city, omo-onile, and hoodlums at many junctions of our towns who were recruited as thugs by our politicians are examples.
End SARS protest ongoing in many parts of the country have shown how violent our youths can be. And this is evidence that we are sitting on a time bomb as a nation due to the neglect of our youths. Thus far, youths have been timid in fighting for the rights either right or wrong. However, end SARS protest have opened their eyes and social media which made the views of protest went viral has not helped the matter. Attempt of the police to stop the protest were vehemently rejected by the protesting youths. Peaceful protest and demonstration are allowed in the democracy. However, this is not in our clime. Social media has made the world a global village and our youths are conversant with events around the world and the manner people’s rights to protest are guaranteed. It is high time we demonstrate our commitment to the tenet of democratic rule and let our youths have a voice.
In Ogbomoso here, the youths comprising students and those from the neighbourhood invaded the Owode police command headquarters to demand for end SARS. The melee that ensued due to their effrontery led to the death of a person on Saturday, October 10, 2020. Not satisfied, the protesters invaded the palace of a prominent monarch in the town on Sunday, October 11, to vent their anger on the monarch for no just cause. The palace was vandalized. Three or more lives were lost in the ensuing pandemonium. Those youths who invaded the sacred palace of the prominent monarch are uncultured and their action was deplorable. Governor Seyi Makinde of Oyo State deserves commendation for prompt intervention in the melee. He promised to visit the families of the deceased and vowed to follow the investigation into the murder to a logical conclusion in order to bring the culprits to book.
Nigerian government can no longer close it eyes to the agitation of any of our youths for a better and secured future. A nation that neglects its teeming youths has destroyed its future. Children of the elite schooling abroad will not have a home to return if the vulnerable youths are not taken care of. Facing life bullets as some youths did in Ogbomoso shows that the youths have been pushed to the wall. Thinking that the march to the Bastile cannot happen in our clime is a wrong assumption. French monarchy was complacent like our leaders until the wave of protest by a people in search of freedom swept it into the dustbin of history. It happened in Russia and other European countries. The recent replica was Arab spring. Few words are enough for the wise!
Adewuyi Adegbite
ayekooto05@gmail.com