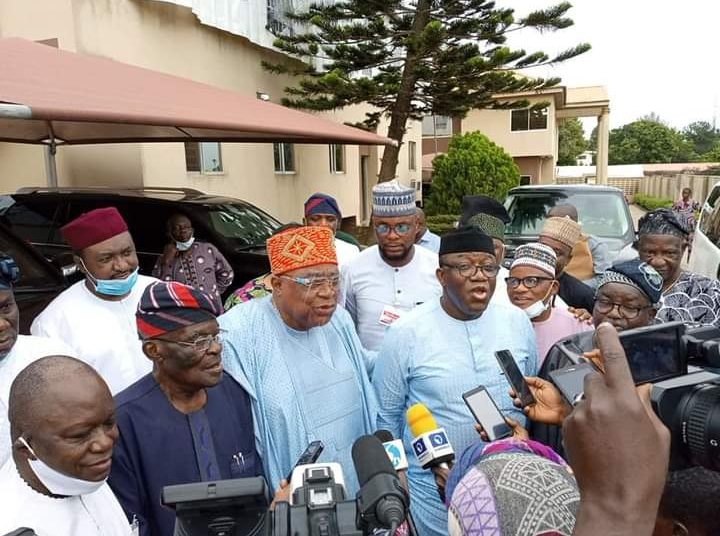 658
SHARES
8.2k
VIEWS
Share on FacebookShare on TwitterShare on WhatsApp

There seems to be end in sight for the crisis rocking the All Progressives Congress APC in Oyo state as top members of the Party met at Gov of Ekiti State Dr. Kayode Fayemi in Ibadan

Dr Fayemi while responding to questions from journalist said  All is settled, we are now a united front as a party moving strongly towards retaking Oyo state and working in the interest of progressive politics”

“I am not aware of any group. I am aware of stakeholders in our party, some who for one reason or the other are disaffected and felt that certain things ought to be done to bring everybody on board and that is what we have done and they are all here. Every segment of our party came to the meeting here today.”

“The target is to win the state. Can there be any other target? The target is to remove my brother, Seyi Makinde. Seyi Makinde is my very good friend and brother. As you know I am Chairman of Nigeria Governors Forum and I can’t campaign against a sitting governor but this is about my party and I have a national assignment.”

Oyo state members of our party have come together and they are not selling groundnut.

Otunba Alao Akala while speaking said he does not and will not belong to any faction as being assumed.

The meeting however agreed on the formation of an Elders Committee to serve in providing direction and leadership in a collegiate leadership arrangement where all leading members will have commitments while taking major decisions towards the repositioning of the Party in Oyo State.