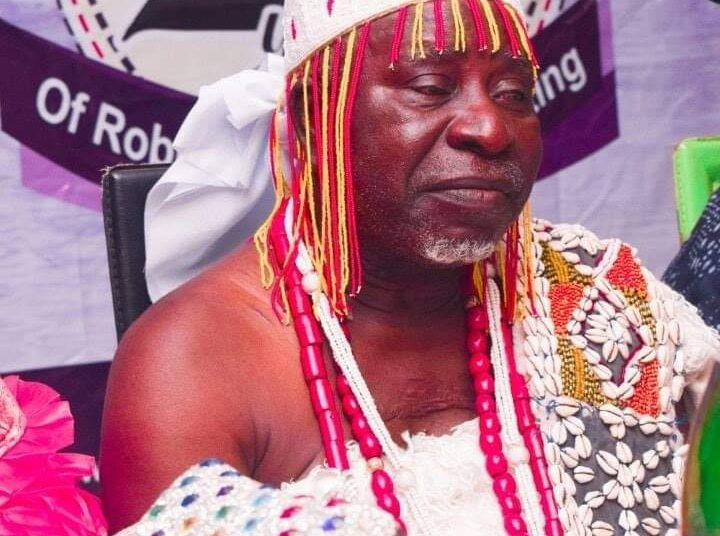 67
SHARES
5.2k
VIEWS
Share on FacebookShare on TwitterShare on WhatsApp

It took me a few days to finally come to terms with the passing of Chief Jimoh Aliu, whose real name is Mr Drama and without doubt, one of the heroes of the Yoruba Travelling Theatre. At first, my mind went blank, gradually over a few hours, the memories started to flood in. His life and times have indeed been nothing else but – DRAMA. He is surrounded by drama.

I started to notice them as far back as my secondary school days at the Abeokuta Grammar School in the sixties. Ìsọlá Ògúńṣọlá (I-Show Pepper), Jimoh Aliu, Charles Olumo, Ray Èjíwùnmí (I believe), Òjingòlò and some of the women were in Akin Ògungbè Theatre Group when they entertained us at the beginning of the new term. The shows usually ended in predictable fiasco as some rascally students who probably could not afford the gate or simply mischievous or just fun would attempt to disrupt it resulting in stampedes and near disasters. Even then, their individual charm shone on stage and burned permanently into our consciousness. You could never forget them! In time, they broke away from the parent troupe to start their own groups: Ìsọlá ÒgúńṣọláTheatre, Jimoh Aliu Theatre, Charles Olumo Theatre and Ray Èjíwùnmí Theatre. Only Òjingòlò did not own a theatre group; he died first.
The real architect of Jimoh Aliu’s popularity is none other than Ambassador Yemi Farounbi, who from his Labs Deroy Company produced
Jimoh Aliu’s sensational Àrélù drama series on television (B.C.O.S) Ibadan. The series with its new trio popular stars – the dreaded Fádèyí Olóró (Ojo Arowosafe), the sensational Orìṣàbunmi (Fọlákẹ́) and the stabilising Àwòrò, (Jimoh Aliu, the leader of the cultural troupe) regularly emptied the street of Ibadan anytime it was aired on television. In actual fact, the popular stars mentioned above in Jimoh Aliu Theatre’s rising profile replaced the original cast of Osho Daramola ( Fádèyí Olóró) and Ramota Daramola (Orìṣàbunmi), who left the group to start their Ẹ̀gbẹ̀dí Travelling Theatre.
But television fame and the stage was not enough. Following Hubert Ogunde’s successful leap into filmmaking with the production of his blockbuster, Aiyé, every theatre group raced to join the league. Yemi Farounbi again took the bold initiative of the first collaboration of a government station, Broadcasting Corporation Of Oyo State (B.C.O.S) and the nascent film industry by producing Àgbáàrín, the first Jimoh Aliu’s film for the cinema audience. For the first time in Nigeria, a broadcasting organisation as represented by Yemi Farounbi, produced a film for the cinema audience, featuring Jimoh Aliu and his Theatre Company and engaged Cinekraft of Wale Fanu and Tunde Kelani supplying technical expertise and motion picture equipment. Unknowingly, the unique venture would prove to be more than DRAMA!
The main location of Àgbáàrín was the groove of Osun Osogbo and the surreal combination of a densely wooded environment inhabited my monkeys, rare birds, other bush animals, labyrinths of world-wide-web of connected roots of trees and intriguing mud figures created by the late Susan Wenger, the Austrian artist, designer and a devotee of the Òrìsà. A true setting and abode of the dramatic characters imagined and created by Jimoh Aliu, all started to take shape as floods of talented actors, drummers, dancers, magicians and loaded Dane guns boomed regularly as the work progressed. However, real drama followed after the successful completion of principal photography.
The more than fifty rolls of Kodak Eastman Colour 400ft exposed celluloid films were packed in a carton and a smaller one containing twelve rolls of quarter-inch audio tapes formed Wale Fanu’s main luggage when we saw him off at Murtala Muhammed Airport to board British Airways flight to London. The trip was a mandatory step in the workflow because of the processing of the films and transfer of the audiotapes could only be carried out in the UK or USA because Nigeria was yet to build a film processing laboratory. He cleared customs who were understanding and cooperative quite easily. Things were progressing smoothly than we had imagined. We wished him a safe journey and waved him off as he went through the gate to immigration and departure.
The following morning, Wale called from London to give us the news that the unexpected had happened. He retrieved his luggage and the smaller package of audiotapes but the package containing more than fifty rolls of exposed negative films had disappeared. We alerted the authorities at the airport who gave us the security to search everywhere including the underground dungeons we never knew existed in our airport but the films were never found again.
Needless to add that sleepless nights followed but in the end, Yemi Farounbi again stepped in and provided the funds and official backing which gave us the opportunity to join other stakeholders, working without pay to converge on location to shoot Àgbáàrín film a second time.
As for his following film Fọ́pomọyọ̀ which starred King Sunny Ade, that is a story for another day.

Chief Jimoh Aliu’s passing at age 81 calls for a cautious celebration and a reminder that we are gradually witnessing the close of an era of our intangible heritage.
Chief Jimoh Aliu, remains one of the great icons and heroes of the Yoruba traditional theatre. Chief Hubert Ogunde, the doyen recognised their talents and surrounded himself with the best anytime he started a new project. Adeyemi Afolayan, Ishola Ogunsola, Lere Paimo, Adebayo Salami, Jimoh Aliu, Olofaina, Omojola, Olowomojuọ̀rẹ́ and all the others were accomplished, writers, composers, dancers and dramatists in the true total theatre tradition of those men and women who travelled the length and breadth of Yoruba nation with the sole responsibility of entertaining the people. If you listened to the soundtracks of Ogunde films on compact discs you could recognise the voices and drumming of some of the greats. As for me, I still refer to them as – Ọ̀gá Ade Love, Ọ̀gá Ẹ̀dá, Ọ̀gá I-Show, Ọ̀gá Jimoh, Ọ̀gá Charles, Ọ̀gá Bello, Ọ̀gá Ọlọ́fàiná, Ọ̀gá Àlàbí Ògúndépò, Ọ̀gá Omilaní, etc. I guess I am lucky and privileged to have been accepted in the circle to practise and the opportunity to learn the cultural dimension of filmmaking or storytelling which cannot be taught in any film school. Unfortunately, most of the early pioneering films like Àgbáàrín, Ìrèké Oníbùdò and all Hubert Ogunde films may have been buried forever due to Nigeria’s poor archiving culture and lack of preservation policy of our intangible heritage. All is not lost as we have finally tracked and found the negatives and optical sound of Blues for A Prodical, a film by Prof Wole Soyinka in a USA film laboratory. The film will be repatriated as soon as we receive the quotation for a combined print and a digital master. Wole Soyinka’s Blues for A Prodigal is an important missing link to the development of African Cinema.
I seize this opportunity to commiserate with the family, friends, practitioners, Government and the people of Ekiti State, – Mo ki yín, ẹ kúu àsẹ̀hiǹdè, ẹkúu arafẹ́rakù, ọjọ́ á jìnnà s’íra o.