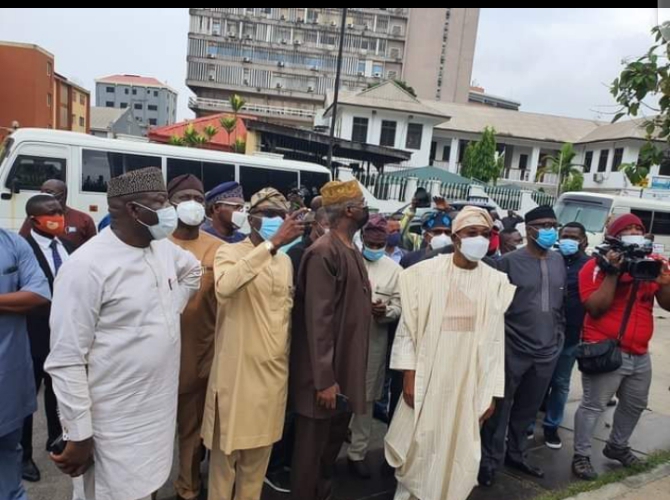 301
SHARES
8.2k
VIEWS
Share on FacebookShare on TwitterShare on WhatsApp

South West Governors and  three of  the Federal Ministers from the region on Sunday  paid a condolence visit to Lagos Governor Babajide Sanwo-Olu on the looting and arsons of public properties and institutions last week by suspected hoodlums.

According to the Nation Newspapers, the Southwest Governors led by its chairman, Governor Rotimi Akeredolu as well as the Ministers commiserated with those that lost their lives and properties in the coordinated attacks.

Governor Babajide Sanwo-Olu took the South West Governors and Ministers round on an inspection of some vandalised areas, including Igbosere High Court, City Hall, DNA and Forensic Centre. They then left off from Lagos House, Marina, Lagos.

The Governors on the entourage include: Kayode Fayemi(Ekiti) and Seyi Makinde(Oyo) accompanied by Minister of works and Housing, Babatunde Fashola, Minister for State of Health, Olorunnimbe Mamowora and Minister for Interior, Rauf Aregbesola.