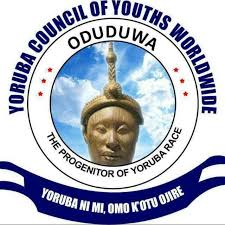 492
SHARES
5k
VIEWS
Share on FacebookShare on TwitterShare on WhatsApp

Yoruba Council of Youths Worldwide YCYW has condemn the recent violent attacks by agent provocateurs and infiltrators, who have hijacked the ongoing Nationwide #endsars protests against police brutality and other sundry issues

The described as unfortunate the  monumental havocs on Governors of Osun and Ekiti State’s convoy and recently Edo State, where grievous criminal acts of jail break was perpetrated by perceived hoodlums under the auspices of #Endsars which has  claimed over 13 lives lost in most ruthless manner under brutal bullets of gun wielding police officers.

Aare Barr. Oladotun Hassan, President, Yoruba Council of Youths Worldwide(YCYW) in a statement  said ”In spite of the President Muhammadu Buhari’s Administration’s interventions, the perpetrated unrest on the streets of Nigeria, associated by the volatile cloud of Protests over activities of the Nigeria Police Force, especially SARS and other Tactical Units, which is fast degenerating into Anarchy and lawlessness.

“In the efforts to chart a way forward, have come to the logical conclusion that it is urgently imminent upon us as critical stakeholders and partners in progress in nation building to constructively engage via continuous peaceful dialogue with the Nigeria Police Force and the Federal Government of Nigeria, in view of the President Muhammadu Buhari’s led Government having yielded to the demands on ENDSARS protesters, with interim solution on ban of SARS, enhanced community policing strategy with the recent launch of Operation Amotekun in Southwest, provisions of reform laws and  the recent launch of the Police Trust Funds are proven facts to give the government a benefit of assurance to addressing the stalemates.”

“We empathize with all Nigerian Youths and lovers of social justice for coming up with a patriotic stands to right the wrongs in our society, however we must as a point of necessity crave towards mutual trust of Peace, Unity, Love, Stewardship and Accountability to the Government and People of our dearly beloved country.”

“We join all well-meaning Nigerians to condemn bad eggs in the Police who perpetrate brutality against innocent citizens, and welcome necessary reforms that shall bring about Modern Policing with Human face. Moreover, the proscription of the Special Anti-Robbery Squad (SARS), as the President Muhammadu Buhari has stated, promises to ensure that “all those who are responsible for the misconducts or wrongful acts are brought to justice” and renewed vigor with which corruption is being fought, we are encouraged to believe that there is light at the end of the tunnel.”

“We acknowledge the genuine feelings of the Youths over issues of unemployment. However, we implore the youths to take advantage of the ongoing programmes of Youth Empowerment such as the Nigeria Youth Investment Fund (NYIF), established by President Muhammadu Buhari’s Administration.”

“We implore all our youths to abate further protests, since the ongoing protests has been hijacked by perceived agent provocateurs and self centred elements, who are hell bent to run a ground the fragile peace in the country, for we cannot afford a war or a Syria or Libya situation, wherein lives in this nations are jeopardized as a result of growing unrest that emanated from Arab Spring, consequently now puts its citizens in a precarious situation that remain nasty, brutish and short.”

“In particular, we the youth should rather open a window of dialogue with the office of the Attorney General of the Federation and Minister of Justice, Mallam Abubakar Malami SAN,  Inspector General of Police, IGP Muhammed Adamu and other well-meaning Political Leaders and interested stakeholders in order  to build trust , confidence and continuously  engage the government, while we interface with our colleagues(youths).”

“In the interim we shall be proposing to the Federal Government to establish as a matter of necessity a National Youth Development Commission, wherein all issues of major concernsbedeviling the Nigerian youths shall be jointly address by all tiers of Governments.

“We hereby reiterate ourviews on the need for the 9th National Assembly to ensure the passage of the Youth Right Bill, whereby Nigerian youths are given a voice as a panacea towards ensuring youth’s rights and privileges are protected, with a view to provide an enabling environment for our youths to thrive and progress.

“We are using this opportunity to put forward a fundamental solution to the Inspector General of Police on the issue of demand for police reformation, with a mandate to establishing The Police and Youth Relation Committee (PYRC), wherein all fundamental demands and solutions to police brutality and corruption shall be addressed by the PYRC at all formations and units nationwide.

“We further vehemently demand that the President Muhammadu Buhari’s led administration should stop the impending planned Nigerian Army’s Crocodile Smile Military tactical moves, while capitalizing and see this clarion calls by the Nigerian youths to improve on critical areas of youth unemployment, women empowerments and social welfare of her citizenry in the next 7days should the protesters accept to suspend the ongoing warning protest.

“We await immediate attention on all areas of demands viz: Restructuring, Good Governance, Prosecution of all indicted Sars officers, Compensation of victims and reformation of the policing system generally beyond SARS operatives alone, while calling on the implementation of Confab reports that guarantee state policing strategic framework plans.