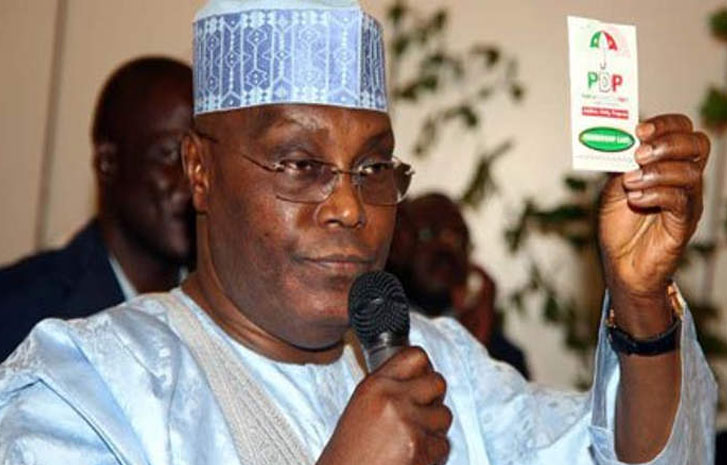 The Peoples Democratic Party (PDP) is optimistic that its Presidential candidate, Atiku Abubakar, is set to revamp the nation’s economy through the creation of qualitative employment for the youths.

The party said its candidate will also implement the political and economic restructuring of Nigeria in a manner that will engender unity, inclusiveness in governance and upliftment in the general standard of living for all the people.

In a statement on Sunday by its spokesperson, Kola Ologbondiyan, the PDP maintained that on election into office, Atiku will immediately commence the marketing of Nigeria to the international business community, as well as providing a clement environment for businesses to thrive in a the country.

“Atiku will open a system-wide fight against corruption as soon as he is elected into office by strengthening the institutions empowered by our laws to do their jobs, while he concentrates on the onerous duty of governance and rescuing our people from hunger, starvation, bloodlettings and wanton killings.

“The rebranded PDP assures that all those looting the national treasury, including those now enjoying President Buhari’s official cover, will definitely face the wrath of the law and go to jail, because the Atiku Abubakar administration will not only fight poverty but will also uncompromisingly fight corruption, noted the party.

The PDP said that a combination of Atiku Abubakar and his running mate, Peter Obi, known internationally for their forthrightness, hardwork, ingenuity and managerial competencies, guarantees a prudent and result-oriented administration that will liberate the nation from the economic shackles that President Buhari’s wasteful, notoriously incompetent, and deceptive administration has plunged us into.

“Atiku Abubakar comes with the Nigerian resilient entrepreneurial spirit to once again open up our economy, attract investments, create jobs and unite our citizenry for a more productive nation. “Already, our candidate, as a successful entrepreneur, has perfected an economic template that will reduce the cost of governance, plug wastages, tackle corruption, free our national resources currently being squandered by the Buhari administration and channel them for the welfare of the people.

“What Nigerians earnestly desire now is a resourceful President, not an incompetent leader who lacks the capacity to run a complex economy; who stays aloof and completely insensitive to the plights of citizens, while providing official cover for his officials to fritter away trillions of naira from our beleaguered national treasury.

“Our youths are earnestly seeking for an in-charge President, not one who rules by proxy. They look forward to a President who will give hope in the face of a consuming despair and one, whose words resonate with their aspirations in life.”

“Nigerians seek a President who will not watch helplessly while marauders and insurgents kill our brothers and sisters in their numbers; whose only achievement is plunging our nation into economic recession, collecting foreign loans and accumulating debts with nothing to show, said Ologbondiyan.

Holding that President Buhari has failed on all fronts such as the economy, on security and on the fight against corruption, the party said the 2019 election is therefore, a direct referendum on these failures and the determination of Nigerians to choose a new leader who will rescue our nation from the throes of hunger and starvation.