Atiku Urges Nigerians to Get PVCs 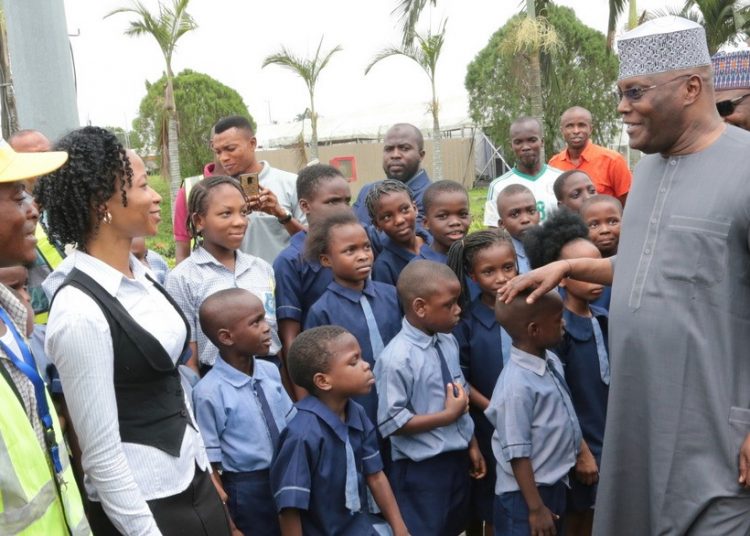 Abuja, Nigeria, 28 March, 2018: Former Vice President and chieftain of PDP, Atiku Abubakar at a meeting with students of two primary schools on excursion to the Port Harcourt International Airport shortly before his departure to Abuja at the end of his two-day visit to Rivers State.

Former Vice President of Nigeria and chieftain of the Peoples Democratic Party (PDP) Atiku Abubakar, has called on his supporters and Nigerians in general to ensure that they register and collect their Permanent Voters Cards (PVC) ahead of the 2019 general elections.

Atiku made the call during the launch of a website for one of his support groups known as Concerned Citizens For Atiku (CC4Atiku).

Represented by the Chairman of All-Atiku Support Groups, Mr. Oladimeji Fabiyi, the former Vice President noted that technology will play a huge role in mobilizing the electorate in next year’s election. He, however, cautioned that since elections are not conducted on the social media, “it is pertinent that you go out there and tell your family and friends to register and collect their PVC.”

He urged young Nigerians to participate more in politics and organise themselves for the purpose of taking over from the older generation of politicians.

“I have said it before and I will reiterate it here that I am fully committed to the agenda of generational transfer of power to the youths of this country. I think it is important that your generation participates more in politics and organise yourselves.”

The convener of the group, Mr. Adebowale Jante thanked the former Vice President for honouring their invitation and stressed that the group will join several other Nigerians to urge Atiku to run for the president in the 2019 election.