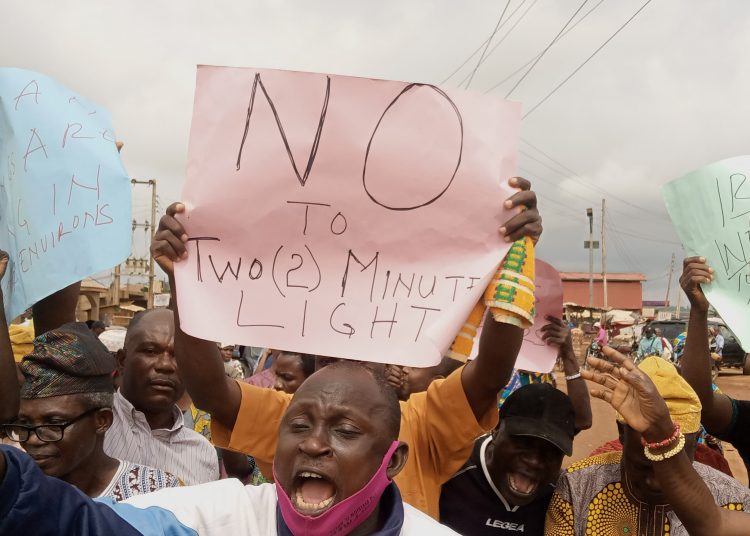 43
SHARES
2.3k
VIEWS
Share on FacebookShare on TwitterShare on WhatsApp

The protesters armed with placards bearing different inscription which expresses their thought on the irregular supply of power to their areas accused management of the electricity firm of crippling their businesses and subjecting them to attacks by hoodlums, particularly in the night.

President Awotan community landlord Association Eng Rasaq Fabayo while speaking with journalists said it is sad that over 50 communities in Apete area have been subjected to long hours of darkness by the IBDEC, they don’t give us light in the day and at night when they give us, it is just 2 hours at times less than 30 minutes and at the end of the months they bring crazy bill.

“Because of this most of the artisans especially those who cannot afford to buy generators have moved out of the community, the impact on the economic situation is negative because of the electricity situation

We have written several letters to the management of the IBEDC, and National Electricity Regulatory Company NERC, they are yet to reply us, this protest is a kind of warning protest to sensitize them on the plight of the residents of communities in Apete

Also another resident Umar Abiodun   while speaking with our reporter said  ‘ We have been on this for many years and instead of  engaging in a continuous war that yield no positive results, the IBEDC  should stop their operations in Apete and its environs, let them stop their supplies and stop and generation of money from this ares, we don’t  want to fight them , they should stop cheating  us