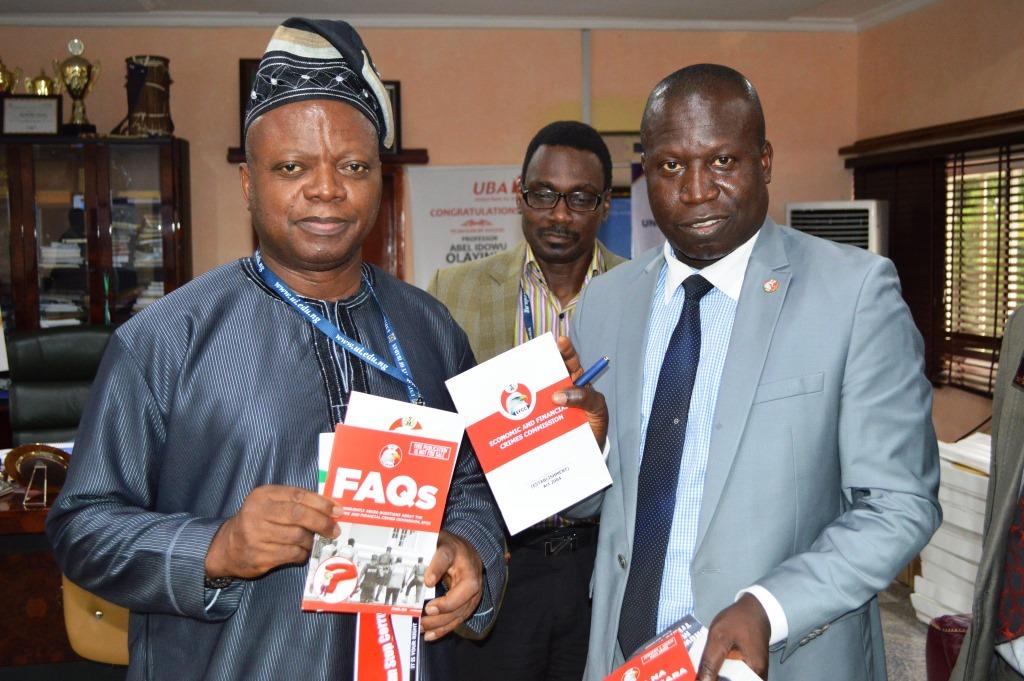 The management of the University of Ibadan has promised to partner with the Economic and Financial Crimes Commission, EFCC, in its campaign against criminal tendencies among students of tertiary institutions across the country.

The Vice Chancellor of the university, Prof. Abel Idowu Olayinka, gave the institution’s commitment on Wednesday, April 10, 2019 when the zonal head of the EFCC’s Ibadan office, Friday Ebelo, led officers of the commission to pay him a courtesy visit in his (VC’s) office.

Describing the EFCC’s mandate of waging war against all forms of economic and financial crimes as ‘a difficult national assignment’, the UI helmsman noted that the nation’s foremost anti-graft agency deserves the support of everyone.

Worried by the rising cases of involvement of young undergraduates in financial crimes, the EFCC had written to seek partnership with the premier university in mapping out strategies to stem the trend.

In recent times, the commission had secured arrests and convictions of a number of young men involving in financial crimes of different kinds. Most of them, according to records, are either undergraduates or fresh graduates of higher institutions of learning.

“The nature of arrests and convictions our commission secures in recent times, in which a large number of culprits are youth who are supposedly our hope and future as a nation, has made it more pressing for us to engage our higher institutions of learning in thinking out strategies to stem the disturbing trend.

“As the premier university of our dear country, we believe it will be of great significance to start this campaign with a visit to the leadership of this leading ivory tower,” the commission stated in a letter written to the university to initiate the partnership.

While declaring the essence of his team’s visit, Ebelo told the university management that the time has come for the agency to foster strategic partnership with major stakeholders in the management of youths with a view to dissuade them from going into crimes, adding that higher institutions’ administrations have critical roles to play.

He requested the university to avail the commission the avenue to meet with the students of the institution to educate them on the dire consequences of crime and criminal activities on the lives of the perpetrators and the nation as an entity.

While responding to the demand, Prof. Olayinka described the two institutions as brothers, having been designated as agencies of the federal government of Nigeria.

“We are brothers. We are both agencies of the federal government created to carry out special functions for the growth and smooth running of our dear nation,” the VC quipped.

He pledged the readiness of the university to partner with the EFCC in all possible ways, saying the partnership will bring about a win-win situation for both, and secure a better future for the country.

The professor of geology then announced that the university will give the commission a slot in its radio station, Diamond 101.1 FM, in which the EFCC would educate the university community on its mandate and educate them on issues bothering on economic and financial crimes and the consequences.

He also said the university will create a space for the commission in its forthcoming orientation programmes for the new intakes and see to how this will be a permanent feature in the annual exercise.