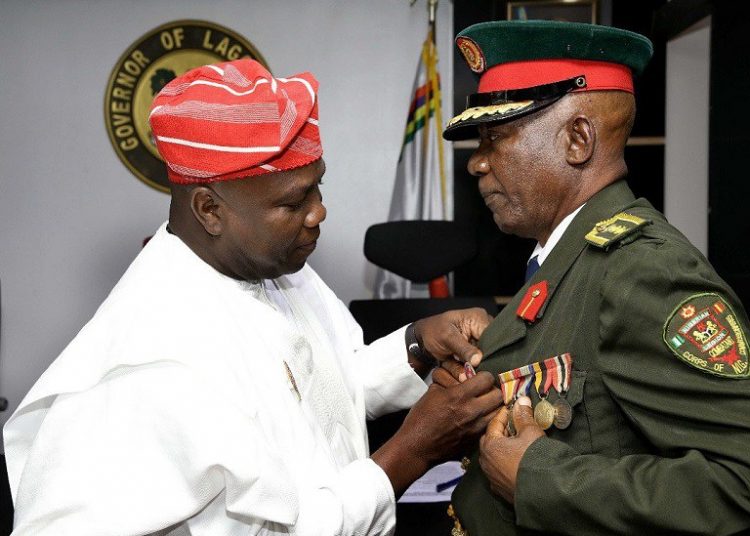 Members of Nigerian Legion are to be deployed to all public primary and secondary schools as well as in ministries and agencies in Lagos state to provide security.

Governor Akinwunmi Ambode of Lagos state who launched the 2018 emblem and appeal fund in commemoration of the Armed Forces Rememberance Day celebration on Wednesday announced he had approved the deployment.

The News Agency of Nigeria (NAN) reports that Jan. 15 of every year is marked as the Armed Forces Rememberance Day.

“We have taken it as a policy that all our public primary and secondary schools will now be secured by the Nigerian Legion.

“We keep the safety and security of our children in their hands,” Ambode said.

He said that this was in addition to them being employed in all the Ministries, Departments and Agencies as security personnel in the state.

Ambode said his administration was committed and concerned about the families of the fallen heroes of the Nigerian Armed Forces.

According to him, the occasion should remind Nigerians of the gallantry and sacrifice of men and women of the Nigerian Armed Forces who have contributed to the protection of the nation’s sovereignty.

“It is time to constantly remember that our unity has been achieved at the cost of lives, which has seen some homes lose their dear ones.

“It is time to engage ourselves in deep reflection of how such homes have been coping and surviving without their loved ones,” he said.

According to him, it is time to rise in their support, express love to them, and appreciate them for their services to the nation.

“Let us always treat our ex-servicemen with respect and donate generously in support of the Nigerian Legion.

“Let us join hands with the government in improving the welfare of the families of our fallen heroes.

“We must seek a way to pay back to these fallen heroes, and the simple way to do that is to buy the emblem, display it, and this will show some sign of love to both the ex-servicemen and those serving presently,” Ambode said.

Earlier, the Chairman of the Nigerian Legion, Lagos State Council, retired Col. Fola Akande, commended the governor for his support and welfare, and also solicited for more support from the government.

Akande said that already, the Legion had trained over 4,000 personnel for the security of the schools.

“We are prepared for the assignment and eagerly waiting for the approval to deploy our trained commissionaire officers to the various schools,” he said.

Also, the state’s Commissioner for Home Affairs, Dr AbdulLateef Abdulhakeem, said that the government remained committed to the welfare of the families left behind by the fallen heroes of the Armed Forces.

“I want to urge all of us that as soon as the governor launches the emblem, let us as individuals take his directive to buy and wear the emblem and also donate generously to the Nigerian Legion,” he said.

He said that there would be commemorative Jumat and Church services on Jan. 5 and Jan. 7 respectively, in commemoration of the Armed Forces Rememberance Day.

NAN reports that the governor announced a donation of N25 million for the welfare of the families of the fallen heroes and for those currently serving.

A trailer load of the locally- produced Lake Rice was also given to members of the legion.

At 55: Saraki a distinguished Nigerian – Buhari

At 55: Saraki a distinguished Nigerian – Buhari