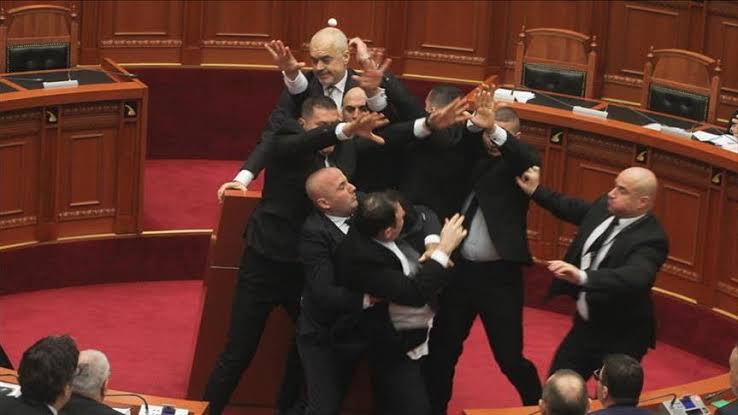 An Albanian MP hurled eggs at Prime Minister Edi Rama at a parliament proceeding on Thursday, splattering his tie in a dramatic return for an opposition coalition that has boycotted the house for six months

Bodyguards quickly rushed to help Rama, who was addressing MPs from a podium about recent student protests.

The session was postponed until the evening and the speaker of the parliament said the egg-throwing MP, Endri Hasa from the conservative Democrat party, would be banned for 10 days.

The opposition said the act was in solidarity with student protesters, who have recently been tossing eggs at the education ministry during rallies.

Former president and current opposition MP Sali Berisha wrote on Facebook that the eggs were “a greeting card for the Christmas and New Year’s holidays… sent by the opposition to Edi Rama”.
An incensed Rama lashed out immediately on Twitter.

“During the months of boycott, their deputies had to kill time in the hen houses by raping chickens and looting eggs,” the Socialist Prime Minister wrote.

“The opposition should have discussed the students’ demands but in fact it turned the parliamentary session into a conflict,” he added.

The students have been gathering in Tirana for weeks to demand lower tuition fees, better campus facilities and other reforms of the public university system.